Abbott is committed to supporting its employees as they build their ideal career.

Abbott recognizes much of its success comes from its employees, who not only perform well in their current job, but constantly strive to grow and advance their careers. As they grow, so does the business. Employees are encouraged to provide guidance to one another, and those with more experience often take coworkers under their wing.

Enter Abbott engineer Cheryl Lecy and principal engineer Chad Green, who have worked together on multiple projects, including collaborating on one of Abbott's most ambitious medical engineering projects. Their relationship has helped Cheryl find her preferred career path and helped Abbott speed the production of a life-saving pediatric heart valve.

Lecy and Green both came to Abbott with backgrounds in advanced biomedical implant production. Lecy's work had focused on innovations like advanced angioplasty catheters and new drug-coated stents, while Green had focused more specifically on advanced heart valve designs. With clinical studies for an infant-sized pediatric heart valve already several years underway, the duo found the perfect fit working together on the valve's final product development.

The work was compelling, but being able to truly impact people's lives made the project deeply fulfilling. "It was very rewarding because it wasn't a big money-maker project; it was because there was really a need," Lecy says.

When Lecy and Green began working with Abbott, the pediatric heart valve still needed to undergo final verification and validation before entering global markets. Green took up a management role in Abbott's structural heart business, where he helped to quarterback Lecy and the team through this process.

"Abbott supports goal-setting within your current role," Lecy says. "Or, they'll help you find the future role you want more." In her case, that came partially through Green's influence as a manager.

"Cheryl was the primary engineer from the research and development side on this project," Green says. "As her functional manager, I've been involved with helping her and the team deal with some of the high-level challenges we face."

Whether it's an engineering problem to be solved or an arcane jurisdictional barrier to be circumvented, the teams all needed to work together to get the product out the door.

"Chad is a wealth of knowledge in the mechanical valve arena and other areas," Lecy says. "He was a great teacher and mentor through the entire project and provided a lot of history for the valve. He's one of the best managers I've worked with in this industry."

Abbott works to support its managers by emphasizing continuing training and education, so employees can keep developing personally and professionally. This opportunity allows employees to explore career options they may not have considered. Green knows the importance of being open-minded about changes in career focus; before entering the biomedical field, he worked as a mechanical engineer at a major defense company.

"I ran into people who worked in the biomedical field, and it really started to get me more interested in how I could apply what I knew to medical devices," he explains.

Now managing engineers and technicians who support large-scale development projects at Abbott, Green is still acutely aware of the power of career freedom, and it's one of the defining aspects of how he helps his teams to grow.

Committing to Education and Collaboration

Gaining a technical and academic education is critical, but Green says it's just as important to actively collaborate with like-minded professionals. Working in the structural heart business gives employees access to a huge variety of Abbott's experts and engineers, making each day an opportunity to learn from other great minds and grow their skill set.

The many projects in the structural heart business "all tackle different challenges, but they are all small, implantable cardiac devices," Green explains. "It's really neat to be able to work with so many people who are all dealing with the same types of challenges in different ways. It's nice to be able to bounce ideas off those sorts of folks. There's a commitment to continual learning, and Abbott has always been there to provide that."

Abbott has given Lecy the chance to work not only as an engineer in R&D, but also as a project manager, paving the way for her future career growth. With the company's wide breadth of ongoing research, anyone truly passionate about the medical field is able to find a project that inspires them. Abbott is developing everything from new surgical devices, like the pediatric heart valve, to blood glucose monitoring systems, like FreeStyle Libre. It is spearheading the development of tools for everything from heart attack diagnosis to nutrition-first parenting to automated data science software for medical labs. 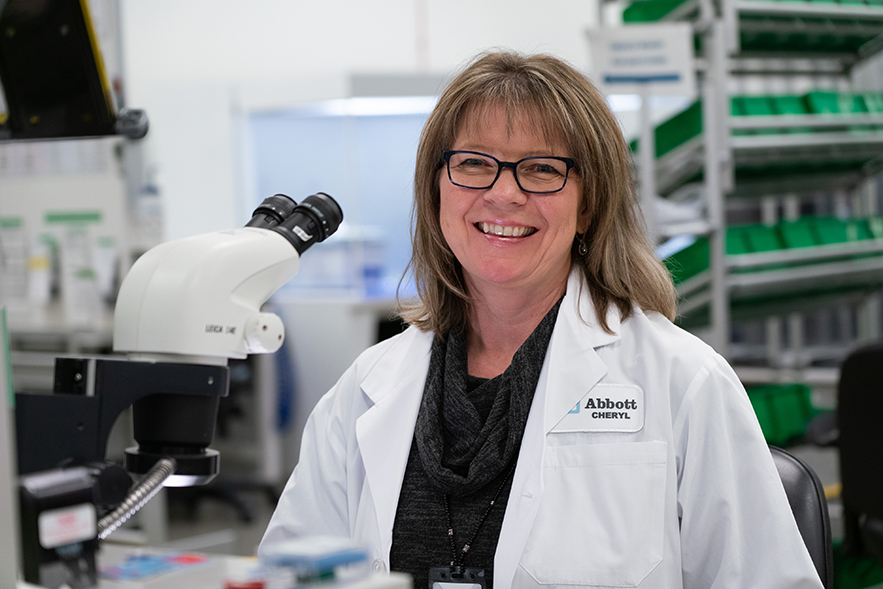 Ultimately, Green and Lecy have both been a part of helping one another grow. Green has mentored Lecy in the structural heart business as an engineer in R&D and as a project manager, allowing her to become a leader in her own right. And Green's transition from the defense industry is now complete; he's a champion of the biomedical industry now, and it's hard to imagine going back.

"Now, it's about supporting the work through its life cycle," Green says with enthusiasm. "And there's still ongoing R&D ... in the structural heart space, delivering devices via catheter. That's the next exciting frontier."

In the modern STEM field, there's always another exciting frontier in the future — and at Abbott, every employee can decide what ignites their passions the most.