Twice a Week, You Can Save Lives. How? Plasma.

Amid nationwide plasma shortages, you have the power to help people by stepping up and becoming a donor.

The COVID-19 pandemic effectively canceled everything. From weddings to graduations to birthday celebrations to something you probably haven't ever thought about: plasma donations. Plasma is the clear, yellow liquid portion of blood used to create life-changing therapies. And while the thought of donating plasma may have never crossed your mind, for a countless number of patients, plasma donations are their lifeline.

Patients who can benefit from plasma donations include burn injury survivors and hemophiliacs, as well as those with rare and/or chronic conditions, and those with immune deficiency. And with 1,200 plasma donations per year being needed to treat just one patient living with hemophilia, the demand couldn't be higher.

The demand couldn't be higher for people like Steve, a Chicagoland-based husband and father of two who was diagnosed with large follicular B-cell (non-Hodgkin's) lymphoma at just 44.

Now 53 and fighting a recurrence, he underwent an autologous bone marrow transplant. 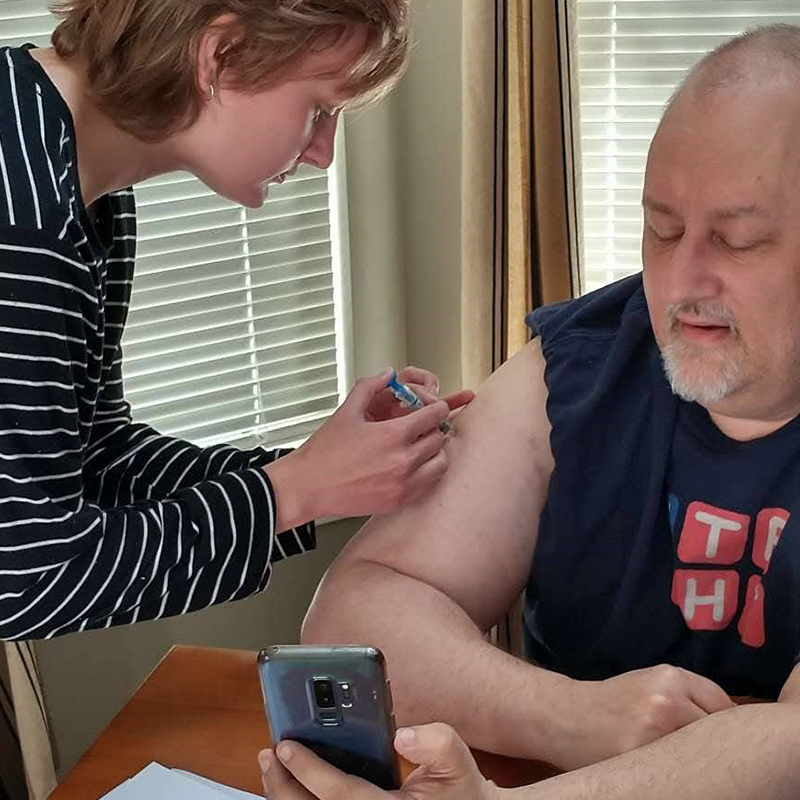 Steve Neruda receiving an injection - administered by his daughter - to prepare his blood for a bone marrow transplant.

As Steve puts it, "Things went — and are going — pretty well. But a key reason for that is the plasma I received during the process."

As a result of chemotherapy, Steve became immunocompromised.

"The chemo kills off the bad things, but takes some good things too, including your ability to fight off disease. You are highly at risk for all manner of bacterial and viral infections, which can easily turn in any number of dangerous directions. A fast, by-the-book recovery is the goal," he said. "And that's where the plasma comes in."

He ultimately received three plasma transfusions in order to ensure that his recovery stayed on track.

"I was sent home to continue my recovery two days ahead of the norm. Which may seem like a small thing, but after 17 days inpatient, it was more than welcome. If I don't receive [plasma], at the very least I'm staying in the hospital longer. … If you're one of those angels who goes above and beyond to donate plasma, I owe you one. Three, actually."

Steve used to be a regular donor. Now, as a cancer fighter, he is unable to donate.

"We're all struggling with something. It may not be cancer. But you really don't know what people could be going through." Most importantly, Steve adds: "You don't know who you could be helping."

As you return to daily life and attend to the appointments you've put off for perhaps more than a year, consider adding a plasma donation appointment to your list. Learn more about plasma donation and become a donor by finding a center near you: https://www.abbott.com/bethe1donor.html#/