A Reason to Give: World Blood Donor Day

World Blood Donor Day on June 14 is an opportunity to raise global awareness of the life-saving nature of blood. This year's theme, "Blood connects us all" has special meaning for mother, Gina Walker.

From the very beginning of her pregnancy, Gina had complications. At her first appointment, her doctor could not detect the baby’s heartbeat and said that she would most likely suffer a miscarriage. Miraculously, weeks later, the doctor discovered the baby was alive and healthy, but Gina’s doctor gave her some frightening news: Due to a rare condition, Gina's own health could be at risk during the delivery process.

To help prepare for the delivery and monitor Gina and her baby's care, she was transitioned to a large hospital with access to a blood bank. The team of doctors explained that Gina would need to undergo a cesarean section (C-section), after which she would need a hysterectomy to help control the bleeding that it was anticipated she would experience. 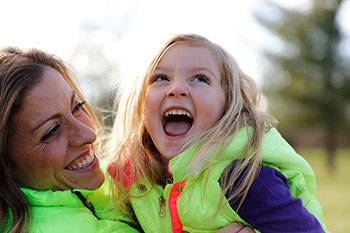 A healthy Addison Grace Walker was born on Feb. 15, 2012, and whisked off to the neonatal intensive-care unit (NICU) to receive assistance with her breathing. But as suspected, it was a different story for Gina. During the planned hysterectomy, doctors spent nine hours fighting for Gina’s life, giving her more than 500 units of blood components.

Gina was kept in a medically induced coma for a week and the doctors brought her into surgery two more times to help repair the damage to her bladder, abdominal wall and pelvis, and then to help stop the bleeding.

For Gina, World Blood Donor Day is a reminder that she and her family had a happy ending. "I hope that by hearing my story, people will be inspired to take action. I am alive to see my children grow up because someone gave blood,” said Gina.

Abbott's continuous improvements to blood screening technologies for more than 40 years underscore the company's commitment to ensuring the safety of the world's blood supply. Blood transfusions, such as the ones that Gina received, help to save millions of lives every year. Despite the constant need for donated blood, only a fraction of people eligible to donate blood actually does so. That's why Abbott is committed to raising awareness about the need for blood donors.

Want to learn more about blood donation? Check out these resources: