Better With Age: This is Colby's Story

Born with a congenital heart disease, he’s lifting himself and using his talents to help others in the same battle.

A Young Life, Restored: Only time can tell the fullness of a life’s story. Colby's life story is one we've told … to a point. What you see in the video above is how far he's come living his life as he wants, chasing his dreams and looking ahead — not behind — thanks to what you don't see: Our technology that's helped him reach his next destination in his life's journey. And to see how far he's come from where we first met him, please keep reading.

Hear that? It's faint. But when you lock it in, it's unmistakable.

Sitting with Colby Groom under this clear blue northern California sky, the rolling hills of his family's vineyard stretching off into the distance, rows of grapes that will, in time, become barrels of good wine bottled up to do millions of good for others, those clean lines of vines, unmistakable in their own way, of the ups and downs of how far he's come and how far he still has to go. This place, right now, you believe it's what they had in mind when they made the word "picturesque."

Here he is, discussing with his parents what led him here, why he does what he does and what he hopes to do next.

Like anyone, you may not always know what's on his mind.

But shhhh. Because if you listen closely, you'll always know what makes him tick. 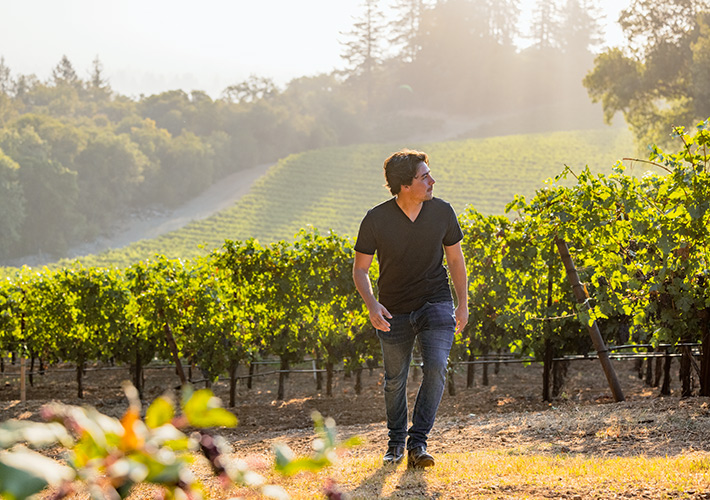 From His Depths, the Climb Back Begins
Colby Groom was born with a bicuspid aortic valve. You don't have to be a surgeon to understand from context that's not what you want. Indeed, it's not the way the aortic valve's three flaps are supposed to form.

He also had a heart murmur.

"Soon after Colby was born, we got the 3-letter word we call it: CHD," said Daryl, his dad, preferring he'd never heard its name.

Blood pressure medication didn't help. As Colby's heart issues worsened, his growth slowed, he was just … tired … and, by first grade, his health was beginning to fail.

It was time. Surgery.

The first procedure — coronary angiography — didn't help. He needed another operation, this time to place a mechanical heart valve to fix his bicuspid aortic valve.

"We decided that the best course of action was for Colby to have the Abbott mechanical heart valve," Daryl said. "We knew that he could live somewhat of a normal life."

"I can only think of the strength of so many who go through more than two — three, four, five — surgeries," Colby said. "But hearing you have to go in again for a second one, was extremely difficult."

Physically, his heart was on the mend.

But his life was limited: Socially, athletically, all the ways so many kids want.

His spirit was broken. It was just too much for such a young one.

"Whilst Colby's physical recovery was progressing as it should have, his whole emotional, mental recovery was a much more difficult thing to deal with," said Lisa, his mum. "He went into a pretty deep funk."

There was only one way to go: Up.

Like any journey, that climb would take a first step, and then a second. 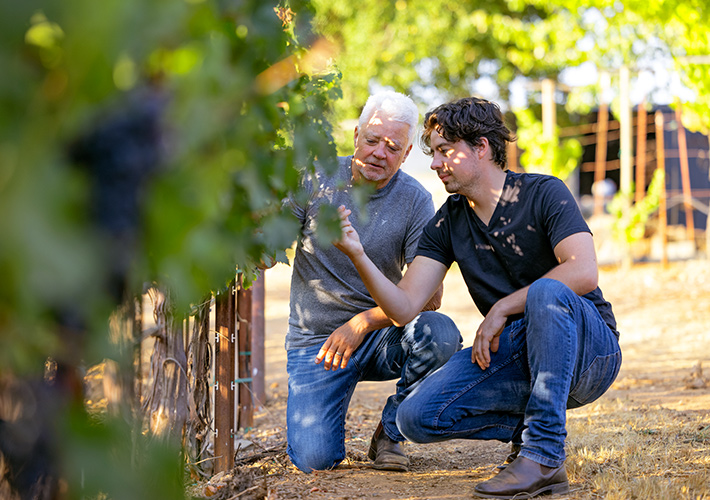 You're Not Alone. You're Never Alone.
For his parents, the most important thing was getting Colby feeling better. Beyond taking care of his heart, that included making sure he wasn't feeling alone.

Granted, it's hard to make small talk about your heart troubles on the playground when you're in elementary school. It just doesn't work that way in fourth grade, even with friends who genuinely care but just don't get it in the same way.

And so, when his folks connected him with others in similar situations — when the door opened to a community he had no idea existed — there was no doubt Colby had found where he belonged. A boy of Australian parents, living in the United States, surrounded by people — and other kids — who did get it in every way.

The motivation was there.

To restore himself. To help them.

To regain his self-confidence through acts of selflessness.

He raised money, offering a dollar-a-listen for people to catch the click-click of his heart valve at work. He worked with a U.S. representative from Minnesota requesting $4 million in federal funding for congenital heart disease research. He volunteered for the Children's Heart Foundation. He's a co-chair of the American Heart Association's Young Adult Board and sits on the AHA's Diversity and Inclusion task force and advocacy board.

Daryl, nearly bursting with pride, tells the story of Colby giving a speech to an AHA audience and receiving a standing ovation. Big stuff for a young man not even 11 at the time.

When he gave back, he got back.

He had started at that bottom rung. After a ribbon-cutting for a heart valve event to bring more awareness to his situation and those living with the same, Colby told his dad: "I feel like I've moved up the ladder."

He was climbing. The first step led to the second. 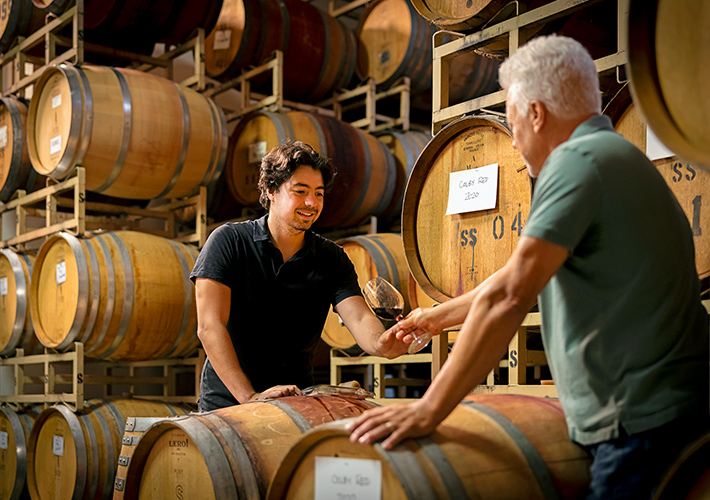 A Barrel Full of Confidence
The Grooms are a wine family. Daryl was a renowned maker in his homeland — both at his own vineyard and with Penfolds — before coming Stateside.

Colby, and his three older sisters, grew up around grapes.

One day when he was in fifth grade, Colby came to his parents with a modest proposal.

"Mom and dad, we're a wine making family," Colby declared. He was staking his ground with intent to grow something on it. "Why aren't we making a wine that helps kids like me?'"

Good question. Daryl had one of his own for Colby: "Why do you want to do this so badly?"

"To help the next generation of kids," Colby said.

"So we set off to buy some grapes," Daryl said. "We were going to make two barrels of wine and raise $500."

And Colby? "He had the biggest smile on his face," Daryl said.

"The rest is kind of history," Lisa said. "From wanting to raise $500 to make us all feel good to, at the moment, closing in on the $2 million mark is a pretty amazing achievement."

"There's still more to be done," Colby said. "I love to do what I can to fundraise for new research and technologies to make the next kid's life easier. If I can make it easier on one family to make it easier to understand what their kid is going through, it's all worth it."

Always another step. Colby, climbing. Colby Red, climbing. And thanks to both, kids just like Colby lifted up. 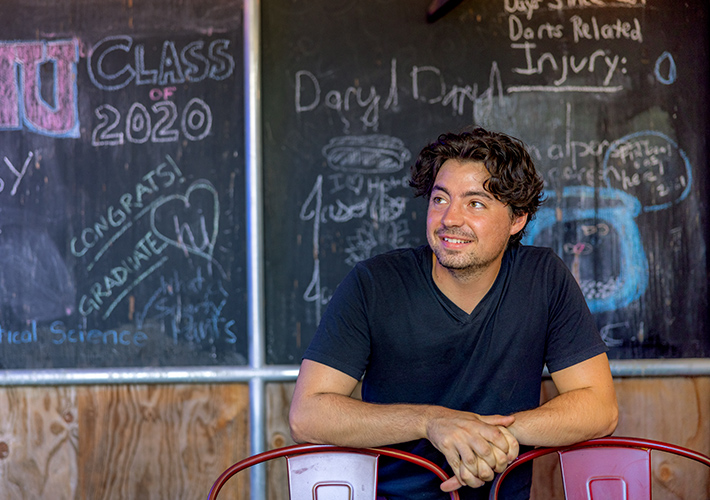 And Now, For His Next Act
At the height of COVID-19, Colby graduated in May 2020 from Loyola Marymount, a solid 7-hour drive from his home, with a degree in history and political science.

His next stop looks like law school but, like so much of his and every life, "It's a work in progress."

That's true of his mechanical valve, which will need to be replaced eventually. Just a side effect of living a long and healthy time after such a scary start.

While Daryl hates the name — remember, "the 3-letter word we call it: CHD" — the sun is shining on Colby, the cloud that hung over the start of his life now off in the distance. "The biggest prize," Daryl said, "is watching him growing into the incredible man he is today."

As Colby told his mum, "I'm actually OK that I was born with heart disease because otherwise, we wouldn't be on this journey. It's made me a better person."

So there you have it: Colby Groom, born with a congenital heart defect (sorry Daryl), lifting himself up, leaning on his family's resources and putting his talents to work to raise money to improve the lives of others, millions of times over.

What did you think we meant?