"Little Tony" Daly relied on our Amplatzer Piccolo Occluder to close a hole in his heart to grow big and strong.

Parenting is full of firsts.

Under three pounds and only 26 weeks along, Tony had a fight ahead of him.

His parents didn't know for sure that he'd grow up to be the first grader he is today. All they knew was that he was born with a patent ductus arteriosus (PDA) — when an opening that allows a mother's oxygenated blood to bypass the lungs and flow directly into her child's heart does not close as it should after birth, inhibiting growth — and his intestines weren't getting enough blood flow.

Tony's doctors knew that they needed to take action.

The standard options at the time were placing a baby on respiratory support to see if the defect sealed on its own or conducting a risky surgical procedure to close the PDA. But Tony's family found hope in the Amplatzer Piccolo Occluder — a minimally invasive treatment for PDA closure in premature infants which at the time was becoming available only through a clinical trial.

"He was no bigger than my hand, and they were going to insert this little device with a catheter through an incision in his leg," Anthony said.

At that point, things had been touch-and-go for some time, and Tony's parents were desperate for any solution. "They don't give you an instruction manual on how to care for a baby at two and a half pounds," Anthony said. "Every day we worried that he wouldn’t make it. When doctors tell you that it’s life or death … "

So Tony's next "first" would be as patient zero for the use of the Amplatzer Piccolo Occluder for PDA closure in preemies. "This had never been done before. We had to base all of our faith and trust in his doctor, and we did," Carrie said.

And sure enough, Tony received the tiny Piccolo device in his heart.

"Instantly after the procedure, his color changed," Anthony said. "Every worry that we had started to subside."

His growth chart steadily increased. His care team let his parents know that he didn't need to see them for regular check-ins anymore. Tony grew into the happy, healthy 7-year-old he is now. 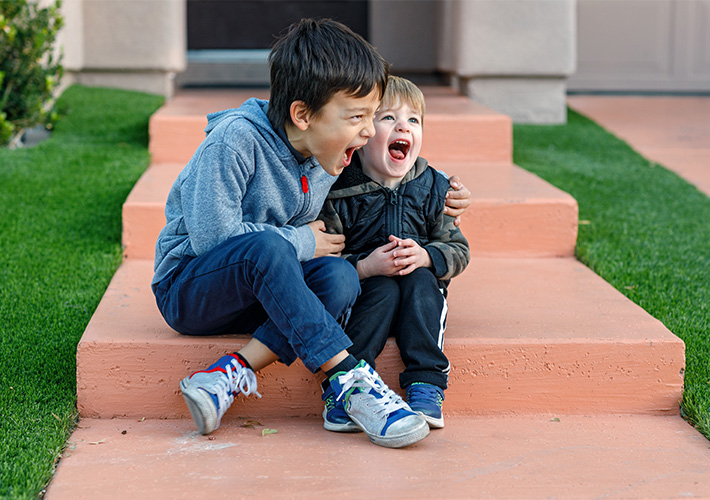 He's still growing. And Tony's Piccolo is still there, functioning as he experiences more "firsts" like his first days of school, first tennis and soccer games and first moments with his baby brother, Colson.

As Tony's parents told him, "this device, this company, helped make you big and strong."

And in 2022, three-year data confirmed the positive impact that our Amplatzer Piccolo Occluder — which is smaller than a pea — has had on premature babies like Tony.

That impact has stayed with Anthony and Carrie. "This device gave us our life as parents. He was our first born," Carrie said. "It gave us everything we have today and set the path for a very fulfilling life."

Firsts can be scary. Unpredictable. Unpromised. And in Tony's case, lifesaving.

The Amplatzer™ Talisman™ PFO Occluder is indicated for percutaneous transcatheter closure of a patent foramen ovale (PFO) to reduce the risk of recurrent ischemic stroke in patients, predominantly between the ages of 18 and 60 years, who have had a stroke due to a presumed paradoxical embolism, as determined by a neurologist and cardiologist following an evaluation to exclude other causes of ischemic stroke.

CAUTION: Intracardiac echocardiography (ICE) or transesophageal echocardiography (TEE) is recommended as an aid in evaluating the PFO and placing the Amplatzer™ Talisman™ PFO Occluder. If TEE is used, the patient’s esophageal anatomy must be adequate for placement.

CAUTION: Be cautious when using fluoroscopic X-ray guidance, which may be used during placement of the device.

CAUTION: Do not use a power injection system to put contrast solution through the sheath.

The safety and effectiveness of the Amplatzer™ Talisman™ PFO Occluder has not been established in patients (with):

PATIENT COUNSELING INFORMATION
Physicians should review the following information when counseling patients about the Amplatzer™ Talisman™ PFO Occluder and the implant procedure:

It is recommended that the medical team (neurologist and cardiologist) and the patient engage in a shared decision-making process and discuss the risks and benefits of PFO closure in comparison to using antithrombotic therapy alone, while taking into account the patient’s values and preferences.

POTENTIAL ADVERSE EVENTS
Potential adverse events that may occur during or after a procedure using this device may include, but are not limited to: