When her hometown hospital didn't offer CardioMEMS, Beth Marcello took her heart health into her own hands, handwriting a plea for the lifesaving device.

Beth Marcello was used to taking care of other people. A single mother of three who taught high school and college students northwest of Chicago, she was so passionate about her career and her family that she often overlooked her health.

But after she retired, her once indefatigable energy flagged. She didn't have the stamina to maintain her active lifestyle. She couldn't even see her grandkids.

When she was diagnosed with heart failure in 2015, she knew something had to change. She had to be her own health advocate for the best possible treatment.

So the retired business communication teacher did what she did best — she turned to the written word, drafting handwritten pleas for the heart technology she needed to get her life back on track.

An Old Routine, a New Option

Marcello had a heart attack in 1994, when she was 48. A year later, she underwent triple-bypass surgery. Follow-up treatment required her to get an angiogram every year. She underwent heart surgery again in 2008 to have a heart valve repaired.

All things considered, she felt fine. She was in relatively good health and active. She had to be. 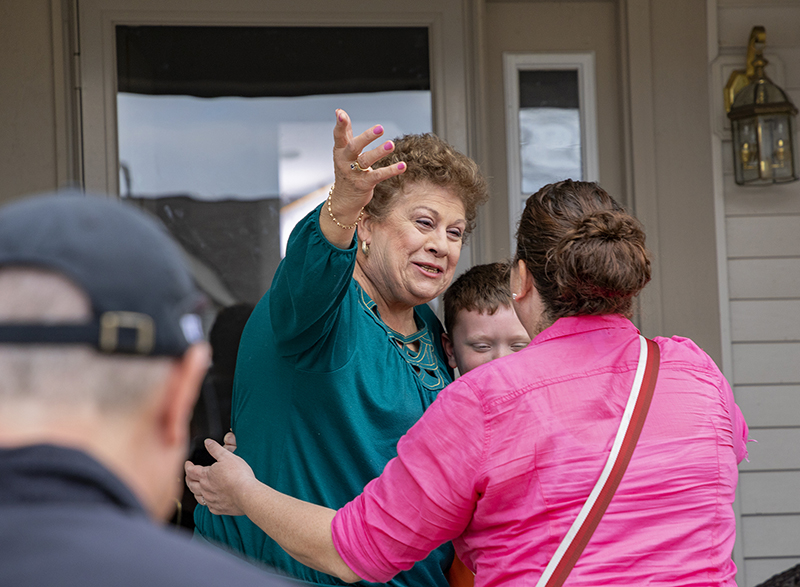 By 2015, three years into her retirement, she noticed her quality of life slipping. The pain and exhaustion she'd experienced around the times of her heart attack and heart valve repair had returned. She didn't have the energy she used to. She didn't know what was happening, but she couldn't deny the effect it was having on her life.

"When I retired from teaching, I didn't have the lifestyle that I wanted," she said. "All of my friends were doing their thing and would say, 'Beth, come along.' I would be like, 'Oh, let's do it next week instead.' I just didn't have the energy."

When Marcello went in for her yearly angiogram, her cardiologist told Marcello she was in heart failure.

She spent three weeks in the hospital in 2015, continuing her course of medication and getting regular angiograms. Doctors presented her with an option: She could be fitted with an exterior heart pump, but she'd need more surgery, and the procedure was dangerous. She might never fully recover.

He recommended the CardioMEMS™ HF System, an implantable heart failure monitoring system that continuously monitors pulmonary artery pressure. The system gathers data, and once a day users lie on a pillow to wirelessly transmit that data to their care team, which allows them to adjust treatment plans. It's one of many technologies that we offer to help people take charge of their heart health.

Marcello's cardiologist heard about the innovation at a medical conference. He thought the innovative piece of heart technology would be perfect for her.

There was just one problem: Her hometown hospital didn't offer it.

A Persuasive Letter, a Powerful Difference

That didn't stop Marcello. She was determined to enjoy her retirement and regain control of her life, and she knew she had to push for what she wanted. She channeled her career talents into the point of a pen, writing a letter to her hospital's board of directors.

"I taught business communications at the college level, and I never hesitate to write what I think," she said. "And I've always believed that if you want something, people should hear from you."

Marcello poured her heart into that handwritten letter. She related how she, a single mom of three grown children, had struggled to live her life as a busy high school teacher and college professor with a chronic heart condition. How her first heart attack came as a complete surprise in the mid-1990s at age 48. How she'd gone through four rounds of cardiac rehab and had been working on a fifth when her pain and exhaustion came back with a vengeance.

"I was almost dragging around feeling I was so tired because I felt I was burning the candle at both ends," she said. "I was teaching high school. I was teaching college. I was trying to keep up a household for three children. It was a strenuous schedule."

She'd researched CardioMEMS and saw how much it had helped people. She closed her letter by asking: Why won't you look into something that helps? Why won't you try this?

She sent her letter to 15 hospital leaders, hoping at least one of them would listen to her.

Soon enough, Marcello got a call. They were considering bringing CardioMEMS to the hospital, Marcello says, because her story painted a compelling picture.

Not long after that phone call, Marcello's hospital started offering CardioMEMS to its heart failure patients. Marcello was first in line to get one.

She received her CardioMEMS in 2016. In the three years she's had it, she hasn't been hospitalized once.

"Every day I'm feeling better," she said. "People want to know what miracle drug I'm on. They say, 'You're looking better. Your color is better.'

"I'm very faithful about lying on my pillow," she said. "A couple of my nurse friends tell me that I'm the perfect compliant patient."

Each day, she spends a few minutes resting her head on the pillow, which syncs up with her internal system to transmit heart readings to her cardiologist. At every checkup, he shares the trends and graphs of her progress with her so that she can see how her efforts — like her dietary choices and medication regimen — affect her health. If need be, her care team can adjust her medications to find the right balance.

If she does have a few consecutively abnormal readings, someone will call her to ask how she's doing — maybe even with a recommendation to tweak her medication routine or clean up her eating habits. But most days, she doesn't get that call because her heart's doing fine. Her CardioMEMS, which she calls her "buddy," tells her so.

And though she may be retired, Marcello isn't done teaching just yet. She's quick to tell prospective patients that the system isn't a miracle cure. She's still in heart failure, but CardioMEMS has helped Marcello seize her second chance. She's put in the work, but, most importantly, she had to be her own health advocate. And she encourages others to do the same.

"I'm not a doctor, but I know enough about it because it's part of me, so I take an active role in my life," she said. "I may have heart failure, but I'm not going to sit by and just wait for my golden day. I'm going to take control and find out my options."

Indications and Usage: The CardioMEMS™ HF System is indicated for wirelessly measuring and monitoring pulmonary artery (PA) pressure and heart rate in New York Heart Association (NYHA) Class III heart failure patients who have been hospitalized for heart failure in the previous year. The hemodynamic data are used by physicians for heart failure management and with the goal of reducing heart failure hospitalizations.

Contraindications: The CardioMEMS HF System is contraindicated for patients with an inability to take dual antiplatelet or anticoagulants for one month post implant.

Brief Summary: Prior to using these devices, please review the Instructions for Use for a complete listing of indications, contraindications, warnings, precautions, potential adverse events and directions for use.

™ Indicates a trademark of the Abbott group of companies.

‡ Indicates a third party trademark, which is property of its respective owner. Bluetooth is a registered trademark of Bluetooth SIG, Inc.