Ana Leaves the Competition in Her Wake

Ana María Canaval Landázuri, champion swimmer 40 years after she left the sport, counts on Ensure to help her leave her competition in her wake.

Ana María Canaval Landázuri, all smiles and wet suit, is beaming. As she prepares to do what a swimmer does — get ready, get wet, get away — you wouldn't think she has a care in the world.

She's more fit than most of us have any right to hope for at this age, realistically. But then she's 65 going on 16 and making up for lost time, making the most of the time she has now.

"My name is Ana María Canaval. I'm a Peruvian swimmer. OK?" she says to an interviewer. 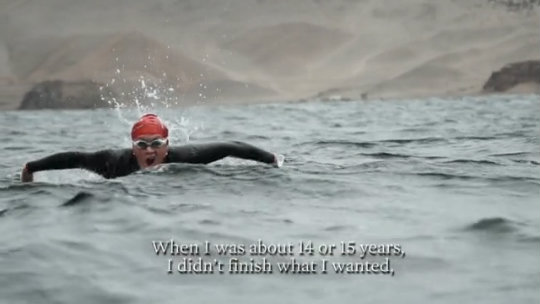 Canaval wasn't always this way. She swam as a kid but, at her parents' urging, she got out of the pool and into her studies. A 40-year gap? Just a false start. Every swimmer has them.

"I started swimming again because my health was very bad," Canaval said. "I have high cholesterol and I had gained weight. So it was very bad for me. My heart was not very good. My nutritionist said I have to exercise."

Eight years ago, at 57, she dove back in. Her training routine is rigorous.

Even she can't help smiling and chuckling a little as she recounts the commitment she's made.

Her commitment has been abundantly rewarded.

"I have about 380 medals," Canaval said. "The most important is from Sarasota because it was the Pan-American Games in 2013. I won the open water, got the gold medal."

The demands of competition take their toll on every athlete. Hitting a wall is common. Her way through it included Abbott’s Ensure, a nutrition drink that can be taken as a meal replacement or supplement.

"I was feeling very tired because I was training very hard for the next competition. It is very important in South America. And I wanted to win!" she said.

"My decision to take Ensure was one of the best I have ever made because it gives me strength. I wanted to train more and that is when I tried Ensure."

In her next meet, Canaval won four races in Uruguay.Her family has shared in her successes. They are her managers, her team, her support. She's as proud of them as she is of the medals that hang in her house.

Ana's goals aren’t limited to her medal count. She wants to help others reach their healthiest selves at full potential, as you’d expect from someone who has worked their career in nursing.

"When I retire, I am going to help people into sport so they have a way to be healthy," she said.

"When I jump in the ocean or in the pool, I am the happiest person in the world."