Stay in the Running: Keeping up at Any Age

Joan Benoit Samuelson is a trailblazer. In 1984, she became the first woman ever to win gold in an Olympic marathon and, decades later, she continues to push further. At 50, she set a record as the fastest U.S. woman in her age group with a marathon time of 2:49:08. Two years later, she ran the fastest-ever time by a woman older than 52 and, at 55, she again proved to be the fastest female marathoner ever in her age group, running 2:47:50 and 2:50:33, respectively.

Now, having turned 60 in May, she still shows no signs of slowing down. So, what's her secret? What keeps her running past when many of her peers have retired?

As a 22-time marathon finisher, Pam Nisevich Bede, MS, RD, a sports dietitian with Abbott shares a similar desire to run long into her golden years. In her mid-30s, Bede has already taken steps to make that happen.

Here, Samuelson and Bede share six tips that have kept them running strong through the decades – and will fuel you on your own running journey.

1. Listen to Your Body

There's no such thing as a one-size-fits-all nutrition or training strategy. After all, everything you do should fit your unique needs.

When it comes to nutrition, Samuelson likes to joke that she's on a "see-food diet." "I see food and I eat it," she says, noting that, because she turns to whole, healthy foods, she’s able to treat every meal like an opportunity to give her body exactly what it needs in that moment.

Know that "exactly what your body needs" will change from day to day and decade to decade. And that's OK. She explains that, over the years, she has cut down on her training volume, going from running twice per day to just once. "I don’t get so hung up on the daily mileage, which gives me the grace to take it easy when I need to," she says. On those easy days or when she needs to focus on recovery, she leaves her GPS watch at home so that she can run without the pressure of sticking to a certain pace. And track workouts? She ditched them 20-some years ago, wanting to make sure that the constant turns didn’t put undue stress on her body.

"As we age, it's natural to feel a few more aches, pains, and sore muscles than you did a few decades ago. Somedays our get up and go has gotten up and left and other days, we feel more prone to injury and need for more effective recovery strategies,” Bede says. "It's important to listen to what your body is telling you and adjust accordingly. For example, I use a foam roller daily and I would never have done that before. I’m working to incorporate more strength training to address imbalances and deficiencies that can lead to injury. But there's no need to wait until you hit a certain decade (and it's never too late to start!); getting good habits established early on is the best way to set yourself up for future success." 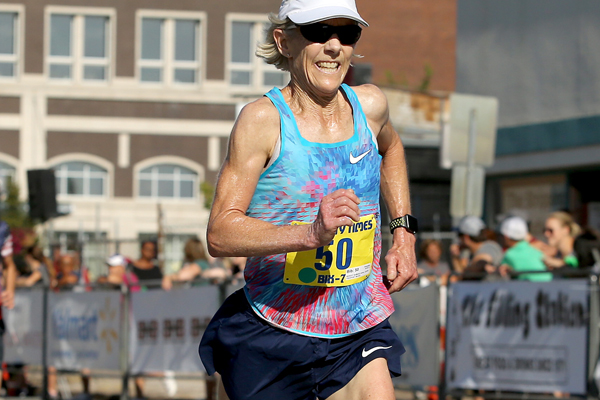 Samuelson takes a holistic view to her training routine. She’s modified it through the years. (Photo courtesy of Quad-City Times)

Having called Maine home for almost all of her life, Samuelson has long turned to local-caught fish as a dietary staple – in addition to protein-packed beans, nuts and lean meats. Protein needs increase not only for athletes but as we age. Since our bodies become less efficient at synthesizing protein with age, and our rate of muscle breakdown increases as we age, it becomes increasingly important for older runners to prioritize making – and hitting – their protein goals, says Bede. (Check out these 5 ways to age-proof your muscles.)

Bede recommends most endurance athletes over 40 consume 1.2-2.2 grams of protein per kilogram of their body weight per day. For a 160-pound woman or 200-pound man, that works out to an average of 116 grams or 145 grams of protein per day, respectively. Heavier training loads or greater age may increase protein needs even further (Make sure you’re getting enough protein.)

It's especially important to prioritize protein intake immediately after workouts, when muscles need the nutrients to repair. Bede recommends eating roughly 30 grams of protein as soon as possible after ending every run or workout. Turn to lean meats, Greek yogurt, milk, cheese, nuts, seeds and, if you still have trouble hitting your goals, that’s when protein shakes and powders come in handy.

Bede is taking steps today to run into her golden years.

3. Fill Up on Whole Foods

For long-term running success, your type of fuel matters. "As a younger runner, you may think 'If the fire's hot enough, anything will burn,'" Bede says. "I never agreed with that, but I’d also like to think that I've cleaned up my diet through the years, running on cleaner fuel than I had in the past."

She notes that, while filling up on whole, nutrient-rich foods is important no matter your age, our needs for certain nutrients, including protein, calcium, vitamins D and B12, actually increase with age.

Those are nutrients that Samuelson gets plenty of, as much of her diet comes straight from her garden. Did you know that kale, chard and other dark, leafy greens are ripe with calcium? And that mushrooms pack vitamin D? Milk, yogurt and other whole dairy sources are great sources of both bone-building nutrients, while those lean meats and fish Samuelson loves are good sources of vitamin B12.

Getting nutrients from whole foods first is always plan A, but if you can't get enough from your diet alone, supplements can help, Bede says.

4. Expand Your Definition of "Exercise"

Cross-training and strengthening exercises are vital to Samuelson's longevity as a runner, but she's not afraid to think (and train) outside of the gym.

"I don't have the time to go to a facility," she says. "It helps with my time management to incorporate other workouts into what I already do in a day. I carry loads of laundry up and down the stairs, wood from outside to our wood stove and I am always gardening.”

Bede similarly recommends cross-training to help you maintain balance and muscle integrity as well as prevent injury. "And by cross training, I don't mean necessarily cycling or elliptical," she says. “I really do think that core work and strength training is so important to helping maintain balance, muscle integrity and flexibility," she says. “These factors keep us running strong and help us prevent injuries. That's probably the one thing that I wish I had done differently when I was 20."

"My biggest issue is not becoming dehydrated," Samuelson says. "When I start to feel tired or sluggish, 9 times out of 10, I would say it's due more to dehydration than actual fatigue, so that's something I always have to be aware of."

For older adults, hydration status is a big concern, Bede says. That's because, as we age, our thirst sensation starts to fail, so it becomes easier to forget about drinking up. "I often run into masters athletes and older adults who say, 'I'm never thirsty, so I don't think about drinking!'" Bede says. However, losing as little as 2 percent of your body weight in fluids during exercise can have a significant impact on performance while also increasing your risk of fainting and heat stroke.

To stay hydrated, she recommends staying hydrated throughout the day, hydrating before you are ever thirsty, and aiming to consume roughly 7 to 10 ounces of fluid every 10 to 20 minutes during exercise. Good options include water and electrolyte-containing drinks such as Pedialyte.

6. Care for the Whole You

"I try to find balance in everything I do, which includes the components of mind, body and spirit," Samuelson says.

Balance won’t always look the same through different stages of life either, as Samuelson points out. For example, decades ago, she scheduled her day around her running, but since having children and taking on many other commitments, she has learned to schedule her running around her day.

In the end, running isn't Samuelson's entire life. It's one of many parts of a well-rounded life – and that's probably the biggest reason why she has stayed so successful through the decades. A testament to the importance of self-care and balance, she proves that it's the strongest individuals who make the strongest runners at any age.