Luck Be a Lathe Tonight: Turning His Parkinson’s Around

When Darryn Wright’s tremors progressed, he turned to our Infinity DBS System to shape his world to his design.

He’s happy. He’s surrounded by people he loves. “I’m so thankful for my blended family. I’m thankful for my wife,” Wright said. He had a happy childhood in his home state of Idaho, and even after moving across the country to Texas 16 years ago, he’s remained close with his mom and brother back home. He found a passion in wood turning after working at a lumber yard, learning more about wood and ultimately receiving a lathe as a birthday gift from his wife. He comes home at the end of each day to a colorful house with two dogs, typically curled up on the couch.

He can do most anything he puts his mind to.

Wood turning? Yeah, and he’s curated the perfect space in his garage for it, too — complete with a model of the Millennium Falcon, retro wall art and tools — a room that reflects the marks Wright leaves on the world around him, whether it’s on the space he occupies, the ink on his skin or the carves he makes in wood. 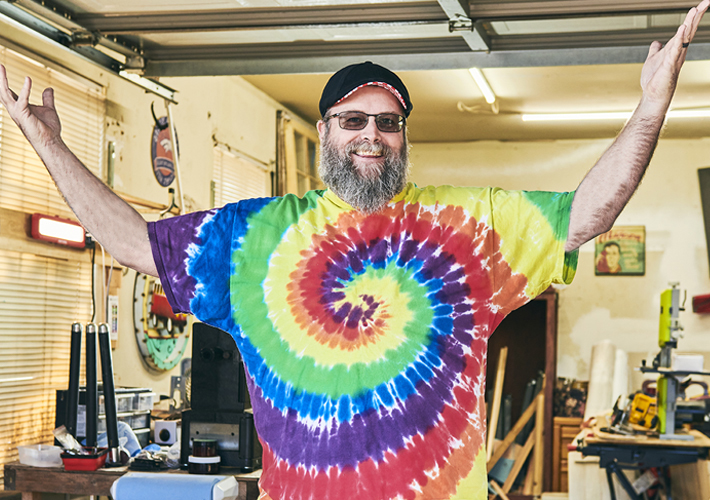 Succeed in a demanding job? All in a day’s work.

He considers himself lucky, but it’s not always good luck. Wright is no stranger to challenges.

Navigate a Young Onset Parkinson’s disease diagnosis at just 44, enduring tremors, soreness and stiffness. Seek help and understanding to fight a progressive disease. Undergo surgery. Explore solutions. And become a staunch advocate for Parkinson’s disease awareness? All in a night’s work after the day’s work is done.

Driving home from work one night in September of 2014, he noticed his right foot involuntarily “bounce” on the gas pedal. Strange. But “I didn’t think much of it,” Wright said.

Stranger still, as he laid down for bed that night, his right hand began to shake. “Again, didn’t think much of it.” That is, until he couldn’t ignore it. His right hand started to tremor, meaning his brain was sending signals to the body, causing involuntary movement, more and more frequently.

While holding hands with his wife, TJ, a few months later, she noticed the involuntary tremor. As a nurse, she probed. “It’s just been doing that,” he offered. Not good enough. She insisted he get it checked out. As any good spouse does, he listened. He again considers himself lucky that he found a neurologist who was able to quickly pinpoint the cause of his tremors in April 2015.

“It was almost a relief to get that diagnosis at that point. We didn’t know what was going on,” he said. “I immediately started carbidopa/levodopa, which is sort of the ‘gold standard’ Parkinson’s drug. I was put on more medications, but they wore off quickly. Sometimes, a dose would only last 30 minutes.”

Over the course of the next four years, Wright was taking up to 20 pills per day — still experiencing tremors and the subsequent soreness and stiffness that comes with them.

As it turned out, his Parkinson’s was progressing faster than originally projected, and much faster than anyone wanted.

“I had tremors, I was stuttering, I would get stuck on words that I had on the tip of my tongue but couldn’t get it out,” he said. “I would try to go on walks with my wife but was slow and couldn’t keep my balance. It felt like my whole body was in concrete.”

By 2018, he recalls having a hard time functioning at work, not being able to do “hardly anything at home,” experiencing pain and frustration, and not being able to sleep. Even his favorite hobby, wood turning, wasn’t possible. “My hand would curl up and my muscles would tense,” he said.

In joining online and in-person Parkinson’s disease support groups and meeting other people living with Parkinson’s, Wright learned of deep brain stimulation (DBS) technology, which utilizes a pacemaker-like device to send targeted signals to the area of the brain to relieve symptoms like tremor.

He discussed DBS with his neurologist and expressed specific interest in our Infinity DBS System, which he knew could be updated and adjusted without needing to remove the battery.

“I knew DBS was an option,” he said. “But my frustration was with not expecting to need to get DBS so soon. What bothered me most, was it showed the progression of the disease. When you’re diagnosed with Young Onset Parkinson’s, the disease should progress slower. What scared me the most was thinking, ‘Am I going to be able to hold my grandkids, walk around without a walker?’ But there was hope in DBS.”

Ultimately, in March of 2019, he received his Infinity DBS System.

“I wasn’t scared going in,” he said. “I was optimistic, but realistic.” 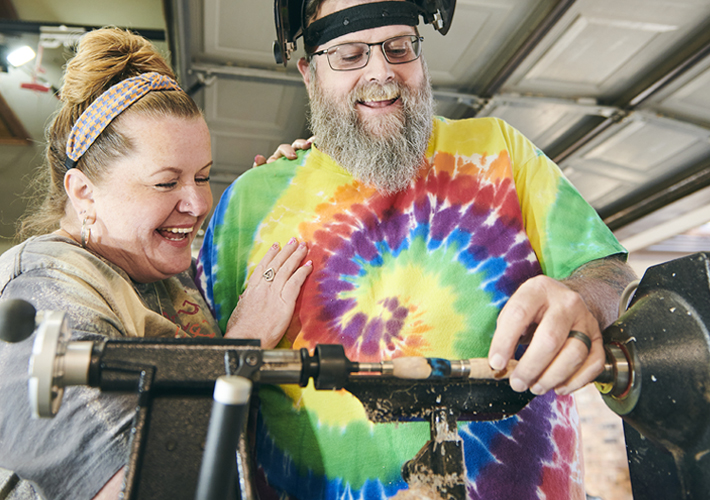 DBS therapy was a success for Wright, and helped him regain control over his health. With our compatible smartphone app, his therapy can be controlled and adjusted based on his needs.

With the help of DBS, Wright is able to channel his energy into what matters most, which includes advocacy and awareness for Parkinson’s disease. He keeps in contact with friends and support group members also living with Parkinson’s, writes blog posts (as colorful as himself and his tatted arms) about his experiences with the disease, DBS and day-to-day life and is aiming to amplify the realities of living with Parkinson’s.

“There is often a lack of awareness. It’s thought of as a ‘shaky old man disease.’ There’s so much that people miss,” he said. “People can’t see the soreness from the tremors. People can’t feel the frustration, or the feeling like your brain is caught in mud. People can’t see how difficult it is.”

This lack of awareness is not limited to those who aren’t living with Parkinson’s Disease. “It’s so important, if you have Parkinson’s, to do your research. Understand what you’re living with. Don’t hide it. Know that there are medications, therapies and options out there for you,” Wright said.

Wood turning? Back at it.

Walks with his wife? Of course.

“DBS gave me my life back. I really got lucky.”

Brief Summary: Prior to using these devices, please review the User’s Guide for a complete listing of indications, contraindications, warnings, precautions, potential adverse events, and directions for use. The system is intended to be used with leads and associated extensions that are compatible with the system

Indications for Use: Bilateral stimulation of the subthalamic nucleus (STN) or the internal globus pallidus (GPi) as an adjunctive therapy to reduce some of the symptoms of advanced levodopa-responsive Parkinson’s disease that are not adequately controlled by medications, and unilateral or bilateral stimulation of the ventral intermediate nucleus (VIM) of the thalamus for the suppression of disabling upper extremity tremor in adult essential tremor patients whose tremor is not adequately controlled by medications and where the tremor constitutes a significant functional disability.

Contraindications: Patients who are unable to operate the system or for whom test stimulation is unsuccessful.  Diathermy, electroshock therapy, and transcranial magnetic stimulation (TMS) are contraindicated for patients with a deep brain stimulation system.

Adverse Effects: Loss of therapeutic benefit or decreased therapeutic response, painful stimulation, persistent pain around the implanted parts (e.g. along the extension path in the neck), worsening of motor impairment, paresis, dystonia, sensory disturbance or impairment, speech or language impairment, and cognitive impairment.  Surgical risks include intracranial hemorrhage, stroke, paralysis, and death. Other complications may include seizures and infection. User’s Guide must be reviewed for detailed disclosure.