Charlene Johnson made her mark in New York fashion. That was hard. Taking on essential tremor with DBS? Not so much.

She commands the confidence of someone who made it in New York City's cutthroat fashion world.

She loved her job in the garment industry.

Now that she's retired, she spends time with her dogs in the park.

"My name is Charlene Johnson. I’m from Staten Island, New York. I have essential tremor."

Her condition is hereditary. She saw it coming, in her grandmother and father. It arrived in her life younger than it does for some.

The essential tremor went after her speech first. She is not someone to be silenced.

Charlene has a story to tell, about losing the grip on her career — and, for a time, her life. And about how, after years of trying medication and other therapies, she found her solution in deep brain stimulation (DBS). 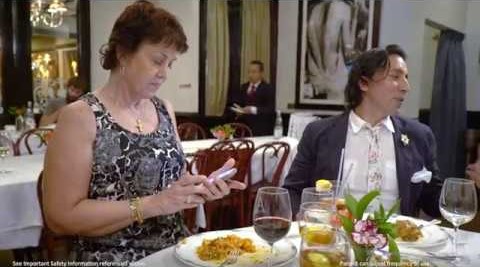 "I'm a strong, independent woman. I never wanted to be a burden on anyone. For me to literally force myself into retirement because I was impaired so bad was devastating to me. That's why the St. Jude Medical Infinity™ DBS System has given me back my life."

"The Simplest Things That You Take For Granted."

The first sign of Charlene’s essential tremor was heard in her voice.

It was the second symptom that was perhaps the most cruel: Shaking in her hands.

Charlene wove her career in fashion as a sweater designer, which requires both artistic creativity and an ability to draw precise technical specifications. It’s hard to do much of anything when your hands shake so badly you can’t draw a straight line or write your signature. Forget getting your work done.

For a time, she was able to hide her symptoms. When she had to show her latest designs, that's when she really worried.

"I never stuck any model with pins. I would always slide one hand in and use the other hand. So I'm the one who became the walking pin cushion, OK? I was the one getting stuck," Charlene said.

"But I can tell you what, I would shield my cohorts from what I was going through because the fact that really wasn't anybody else's business as long as I got my job done. Because I was director and boss, I could form out what had to be done. But handling fittings was always my job."

For Charlene, not being able to do the big things was hard enough.

The simple things, the little things, such as punching in your PIN at an ATM or unlocking your smart phone became frustrating.

"It's really disheartening when you get up in the morning, you go to reach for a cup of coffee and your hand is shaking so much that sometimes it will take two or three tries. And then when you get it in your hand, it goes all over the place," Charlene said. "I can't tell you how many cuts and nicks on my hand from trying to cook or just doing simple things that you take for granted.

"Daily routines. Brushing your teeth, you can't even get the toothbrush in your mouth. You have to hold both hands. And then sometimes the toothpaste is going all over the place.

"I mean the simplest things that you really take for granted in life, you don't realize how much you're impeded."

Charlene's initial attempts at treatment included medication (where she maxed out her dosage) and Botox injections (which were painful for her). Neither brought her the relief she needed.

At a meeting of people living with essential tremor, she met a doctor who would change her life.

From time to time, her support group brought in guest speakers to share their experiences with essential tremor. One day, the speaker was a neurosurgeon who’d had success using DBS. Charlene was in the audience. Afterward, they got to talking.

Later, after an examination, he recommended the Infinity™ DBS System.

For Charlene, that meant two leads on each side of her brain running to twin device batteries in her chest, a symmetrical setup. For some people, a single lead to one battery gives them the relief they need.

"When I first had the batteries put in, I was a little nervous. I was afraid that it was going to shift," Charlene said. "No problems."

With this capability, doctors can steer electrical current with a type of precision never before available, reducing the impact of essential tremor and Parkinson's disease. The DBS system can be conveniently and discreetly adjusted via her iPod Touch controller.

"It's easily accessible through an app, that I can adjust myself. It updates itself. So I don't have to worry about that," Charlene said.

Initially, Charlene went back for adjustments about once a month. It's less frequent now.

"Such a Great Feeling."

The dread of not being able to drink a glass without sloshing it all over you, of having to hold one hand in the other to brush your teeth, of punching in a PIN.

That's all gone now. She laughs about it.

"When I was first diagnosed, I was reaching a point where I couldn't even write my name. I could not draw a straight line," Charlene said. "Within an hour after having the first surgery done, I could write and it was such a great feeling."

Essential tremor did not unravel her life.

"I mean the simplest things that you really take for granted in life, you don't realize how much you’re impeded."

This story reflects one person’s experience; not everyone will experience the same results. Talk to your doctor about the benefits and risks of your treatment options. Abbott does not provide medical services or advice as part of this website.

As with any surgery or therapy, deep brain stimulation has risks and complications. Most side effects of DBS surgery are temporary and correct themselves over time. Some people may experience lasting, stroke-like symptoms, such as weakness, numbness, problems with vision or slurred speech. In the event that the side effects are intolerable or you are not satisfied with the therapy, the DBS system can be turned off or surgically removed.

Risks of brain surgery include serious complications such as coma, bleeding inside the brain, paralysis, seizures and infection. Some of these may be fatal.

US: Bilateral stimulation of the subthalamic nucleus (STN) as an adjunctive therapy to reduce some of the symptoms of advanced levodopa-responsive Parkinson’s disease that are not adequately controlled by medications, and unilateral or bilateral stimulation of the ventral intermediate nucleus (VIM) of the thalamus for the suppression of disabling upper extremity tremor in adult essential tremor patients whose tremor is not adequately controlled by medications and where the tremor constitutes a significant functional disability.

Patients who are unable to operate the system or for whom test stimulation is unsuccessful. Diathermy, electroshock therapy, and transcranial magnetic stimulation (TMS) are contraindicated for patients with a deep brain stimulation system.

Loss of therapeutic benefit or decreased therapeutic response, painful stimulation, persistent pain around the implanted parts (e.g. along the extension path in the neck), worsening of motor impairment, paresis, dystonia, sensory disturbance or impairment, speech or language impairment, and cognitive impairment. Surgical risks include intracranial hemorrhage, stroke, paralysis, and death. Other complications may include seizures and infection. Clinician’s manual must be reviewed for detailed disclosure.