Libre Sense: Safe From the Lows, She Reaches Her Heights

Jenny Nesbitt trains with the world's first sport glucose monitor to prep for her ultimate goal: The Olympics.

It's a Monday afternoon and Jenny Nesbitt has just a few minutes before she's on the run again. Of course, this is not because it's Monday. It's the same story for all the days that end in "y" when you're trying to catch her. (And a note to her competitors: Good luck with that.)

But she's got just enough time to share some of how she got here, some of her dreams for her future and how our Libre Sense Glucose Sport Biosensor is helping to take her from where she sits now (on a Teams call from her apartment in the UK back to the Colonies) and where she wants to get to in 2024.

She's fast, so try to keep up with these 25 splits from her life's story — so far — you probably didn't know:

1. She grew up in Worcester (said "wu•str") in the Midlands of the UK.

2. She was, in her words, "very sporty growing up," including playing field hockey, football (soccer), lacrosse, rounders (sort of like baseball). And when she went into secondary school, "athletics (track and field) became a sport we could choose to do in the summer and I absolutely loved it."

3. She loved it. But her peers were less enamored of the "longer stuff. No one else really wanted to do the 800 meters or the 1,500 meters at school, so I volunteered myself. I was good at anything over two laps."

4. She became a cross country champion, ranked in the Top 5 in the UK in her age group.

5. She was second at the London mini-marathon when she was 17.

6. And then … it all came to a stop. "There were a couple of years where I didn't run. I had an auto-immune disease called Henoch-Schönlein purpura and literally laid in the hospital for a good time. I didn't run for two years, which was pretty awful."

7. But she came back, including a 10K race against Paula Radcliffe, six-time world champion and four-time Olympian who has won marathons in London, New York and Chicago.

8. And guess who won that race? Not Paula Radcliffe.

9. Here's Nesbitt to give you the details: "The start line was 100 meters from our front door so it's like, 'I'm doing this!' And I just happened to beat her on that day and everything just kind of took off from there."

10. A year later, she earned her first Great Britain vest, which she received when representing her country in an international meet.

12. She and her team won gold at a European cross country championships. She raced a 10K championship in Mersin, in Turkey, and took her first individual bronze medal. (And, she likes to note: "I think I was the youngest in the race by quite a lot there.")

13. At 26, she's been running nearly half of her life. She's clearly an elite athlete who has overcome setbacks to reach some of the highest levels of competition in the world. And yet …

15. That's not our take. In her own words: “It wasn’t necessarily something I took that seriously beforehand. I'd go out for a long run and not really bother about taking a gel with me or fueling well or properly after. Just a long run and I'd come home and wait couple of hours and have a massive stack of pancakes because it's Sunday! I was convinced a massive wad of honey on top of something would be the best way to give myself the ultimate amount of energy. But actually, it just spikes my glucose and then I just feel pretty shoddy for the rest of the run." 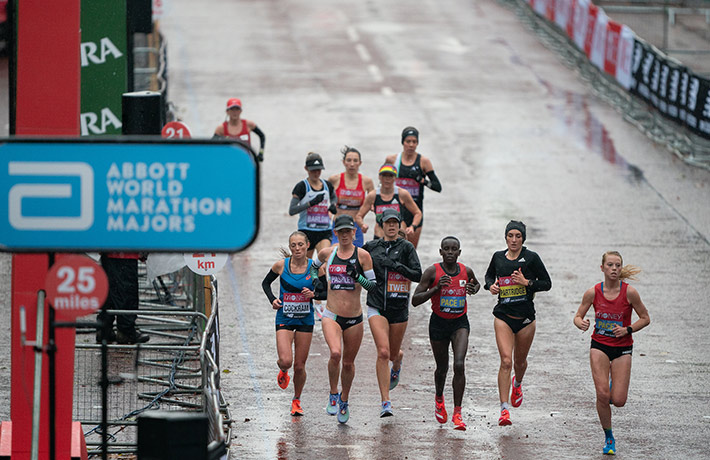 17. Libre Sense is a tool, like activity trackers and wrist watches that provide heart rate. Understanding real-time glucose levels can enable athletes to know the best time and foods to replenish their bodies during training and competition to help maintain peak performance in the moment as well as muscle recovery after. She was the first woman in the UK to wear Libre Sense in an Abbott World Marathon Major when she wore it to pace the elite women's race at the Virgin Money London Marathon last year.

18. Again, in her own words: "Just seeing what fuel or food works better for me. So it's just changing a few things I've taken on board since I started using Libre Sense. Learning what my body does in response to fuels and gels and drinks on long runs will be invaluable. I can really see its value there going forward."

19. This isn't just anecdotal experience. It's real-world data that's making the case for those who might be skeptical.

20. "I'm the sort of athlete who, if I don't have the evidence, I'm not necessarily going to believe it. So for me to actually be able to see it on my phone and be like, 'OK, I can actually notice what's happening now.' I see how I feel internally and the data on the screen and combine the two. So that's been really good for me."

21. She's learned about her body. She just knows herself better. The lows aren't so low and the sessions — seven days a week — have improved. Since her training started in 2021, "I haven't had a bad session this year so far," she said.

22. By the way, those sessions cover "between 85 and 90 miles a week," according to Nesbitt. And yes, she's heard your joke about her running more in a week than you drive.

23. The definitive destination of all those miles? The Olympics. "Paris in 2024 is on my radar now. I'm doing every single thing I possibly can to get myself there."

24. Everything possible includes training, racing (including next year's Commonwealth Games for Wales), proper nutrition and, yes, Libre Sense. "I can look at my glucose levels — they didn't crash and they didn't spike — I see a steady state throughout the session. It's been really important."

25. So, her goal is the Paris Games in 2024. And, as she says, the ultimate for any athlete is just to make an Olympics, however they can. But when she really lets herself dream, she's running the 10,000 meters at the Olympic Stadium. "There's something about being inside a stadium at a major games — which is different from racing on the roads — and you get the ultimate experience of 25 laps of track, don't you? (The stadium) is the hub of the event, really isn't it." And now you know why this story went to 25.

The Abbott Libre Sense Glucose Sport biosensor is not a medical device. It is not intended for use in diagnosis, treatment or management of disease. Libre Sense is available across eight European countries: Austria, France, Germany, Ireland, Italy, Luxembourg, Switzerland and the United Kingdom. The product is not available in the United States.

Abbott is the title sponsor of the Abbott World Marathon Majors, a series of six of the largest and most renowned marathons in the world: Tokyo Marathon, Boston Marathon, Virgin Money London Marathon, BMW BERLIN-MARATHON, Bank of America Chicago Marathon and TCS New York City Marathon.