PediaSure not only saved my son’s growth and development, but his life.

A Young Life, Restored: Only time can tell the fullness of a life’s story. Alex's life story is one we’ve told … to a point. What you see in the video above is how far he's come living his life as he wants, chasing his dreams and looking ahead — not behind — thanks to what you don't see: Our technology that's helped him reach his next destination in his life's journey. And to see how far he's come from where we first met him, please keep reading.

Rachel Lewandowski leaned back in her chair and considered whether her six-year-old son Alex ever met someone he couldn't charm. "Maybe his older sister," she laughed.

"He's so happy," said Rachel, "You would never guess he has a problem." 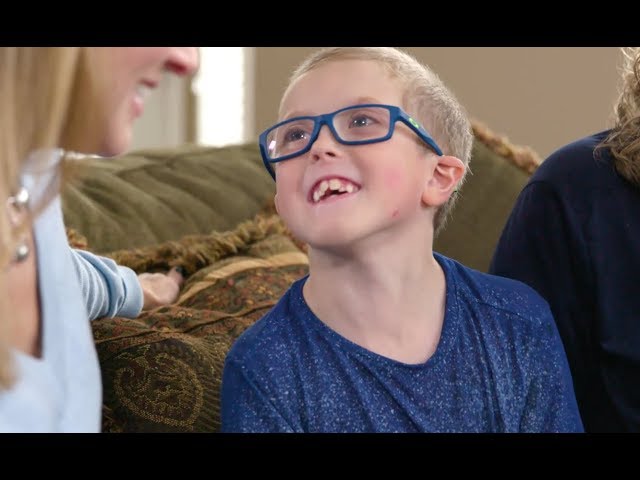 But for the first year of Alex's life, doctors struggled to figure out how to nourish this little boy who couldn't seem to eat, his growth and development was at the top of everyone's mind.

When Alex was born on April 4, 2011, he weighed 6 pounds. However, he never ate much, only a quarter ounce of formula at a time.

He was such an easygoing baby, never crying or fussing but it was only when they tried giving a then-6-month-old Alex solid food, that they realized there was a problem.

Alex gagged as soon as the spoon touched his tongue, Rachel recalled. He wouldn't eat. Or when he did eat, he couldn't keep the food down.

What came next were months of medical tests and hospital stays until finally, a diagnosis – oral dysphagia (the inability to swallow food) as well as severe reflux disorder.

Doctors surgically inserted a feeding tube into Alex's tiny belly when he was 16 months old. Then they showed Rachel and Jim how to operate the feeding tube pump and push the nutrient-packed PediaSure directly into Alex's stomach.

A Mother's "Thank You"

"For everything he's been through, he's the happiest kid you've ever met," Rachel said.

Now, he can drink the PediaSure instead of just having it fed through a tube – three bottles a day, and three more at night through his feeding tube. That's where most of his nutrition comes from. But solid foods are now on the menu for Alex – a few bites of a sandwich or half a waffle.

Rachel is not only a thankful mother, but a thankful employee as well. "When I started at Abbott, I was 26 and single," Rachel said. "I couldn't have predicted all the ways this company would end up benefiting me and my family down the road."

"Every day, when I look at the PediaSure bottle and see our logo on it, it makes the work Abbott does that much more personal and it makes me really proud to work here. I don't know if anyone could be more thankful than I am for this product," Rachel said. "It changed my son's life and kept him alive."