Sustainability isn't just a buzzword — it's an integral part of everything we do.

At Abbott, our goal is not just to help people live their best lives through life-changing technology – it's also to make this important work sustainable for the future.

For us, sustainability is about applying the power of our business to drive positive economic, social and environmental impact – making sure that the work we do helps people live healthier and better, both today and for generations to come. For a comprehensive look at our economic, social and environmental progress and performance, check out our newly published 2017 Global Sustainability Report. But for a quick view of our sustainability work, look no further than our pioneering technologies.

Take the FreeStyle Libre® system, our groundbreaking continuous glucose monitor that delivers a glucose reading with just a wave of a hand. Most people don't think of a diabetes monitor when they think about sustainability – but at the intersection of technology and sustainability, you'll find the FreeStyle Libre system. Read on to learn more about the many ways our work has a sustainable impact, through the lens of a single product. 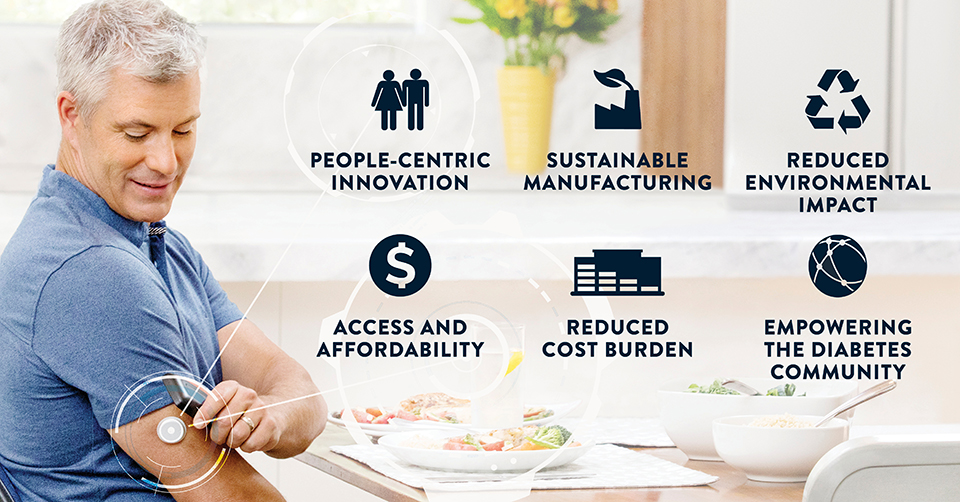 For the more than 400 million people living with diabetes globally,1 monitoring glucose levels regularly is critically important – but also painful and inconvenient, requiring up to 10 fingersticks per day.2

With the FreeStyle Libre system, we've eliminated the need for fingersticks,3 a major barrier to keeping close control of glucose levels. FreeStyle Libre's sensor is painlessly applied to the skin on the back of the upper arm. It's thin and unobtrusive, but it's a technological powerhouse, checking glucose every minute and storing that information for up to eight hours.

So when the user checks their glucose level, it also tells them if they are trending up or down, giving them valuable information that can help them make treatment decisions. Managing diabetes has never been simpler.

"The FreeStyle Libre system empowers people with diabetes to take control of their lives, make informed health decisions and live life fully without the burden of fingersticks," said Jared Watkin, senior vice president of Abbott's diabetes care business. "The FreeStyle Libre system is living up to its full potential of truly being a life-changing technology for the millions of people living with diabetes globally."

One of the key sites for producing the FreeStyle Libre system in Witney, England, is also one of Abbott's 32 sites that send zero waste to landfills. All waste, from factory waste to cafeteria waste, is recycled, reused, composted or responsibly incinerated, and much of that energy is recaptured for future use. The Witney site also contributes to Abbott's broader 2020 global goals to reduce carbon emissions by 40 percent and waste by 50 percent (both based on 2010 and adjusted for sales). To date, Abbott has reduced emissions by 35 percent and waste by 41 percent since 2010.

We also work with suppliers that share our dedication to sustainability – for example, our suppliers have high-speed, automated production lines to produce components at a scale and cost to help keep the product affordable. And we have chosen suppliers close to our Witney site to reduce the risk of delivery disruptions and to minimize transport cost and environmental impact.

Similar to single-use straws, a diabetic test strip is small and may not seem like much to throw away. But considering that millions of people with diabetes need to use test strips multiple times per day, the waste quickly adds up. Fortunately, by eliminating fingersticks3, the FreeStyle Libre system removes the need to use tests strips routinely – allowing people with diabetes currently using the system to avoid throwing out an estimated 1.8 billion test strips each year.4

In addition, Abbott also recently gained approval in the U.S. for the FreeStyle Libre 14 day Flash Glucose Monitoring system, which allows people with diabetes to wear the sensor for two weeks, vs. 10 days that were approved in the past. This means people will need to replace their sensors less often – using up to 10 fewer sensors per year.5

From the beginning, we have worked to provide broad access to the FreeStyle Libre system in countries around the world. This includes a global pricing structure that keeps the product low-priced, with costs averaging the equivalent of just two cups of coffee per day. Beyond the price of the system, the FreeStyle Libre system also saves users from having to pay for test strips that are typically used for routine blood glucose self-monitoring3. Abbott recently presented data that showed FreeStyle Libre users saw savings of more than $120 a month by eliminating the cost of test strips.6

We also work with governments around the world to qualify the FreeStyle Libre system for government reimbursement, making the device more accessible for people who could most benefit.

All of this work is translating into rapid access for people with diabetes: the FreeStyle Libre system is now available in more than 43 countries and is partially or fully reimbursed in 30 of them – with 800,000 people currently using the system.7

It's estimated that approximately 6-17 percent of healthcare spending is allocated for diabetes in countries around the world.8 The FreeStyle Libre system is designed to reduce costs, not only by making the device affordable to individuals but by reducing the cost of diabetes for local healthcare systems.9 The FreeStyle Libre system is supported by both clinical data,10, 11 and real-world evidence12 that show that people who scan more frequently spend less time in hypoglycemia (low-glucose levels) or hyperglycemia (high-glucose levels) while having improved average glucose levels, demonstrating improved glucose control overall.

Better glucose control means healthier people, which can result in hospital cost savings and the reduction of long-term complications related to diabetes,13 potentially lessening the impact of one of the world's leading non-communicable diseases (NCDs). For example, we've shown in two recent randomized control trials that the use of the FreeStyle Libre system has led to a reduction in hospitalizations, ER visits and ambulance use.14

When you're living with a chronic condition like diabetes, it's always good to know someone is in your corner, which is why we support the diabetes community in countries around the world.

Abbott trains FDJ employees, offers discounted products, helps expand clinics, and developed an online pharmacy that makes products like the FreeStyle Libre system available to people throughout the country. All with the goal of providing people with the tools and information to successfully manage their diabetes.

The FreeStyle Libre system is designed to provide users with the information they need to make smart treatment decisions. The next step is moving from handheld devices like FreeStyle Libre readers to connected consumer electronic devices like smartphones and smart watches. This shift is already underway in Europe, where Abbott has launched the FreeStyle LibreLink mobile app.15 This app allows users to access glucose data directly from their compatible smartphones,16 eliminating the need for a separate reader.17

"There are several fundamental shifts that are transforming glucose monitoring and diabetes management, including moving from test strips to sensor-based technologies, moving from proprietary handheld devices to connected devices like mobile phones, and moving information to cloud-based solutions to support clinical decisions," said Joel Goldsmith, senior director of digital platforms for Abbott's diabetes care business. "These shifts will enable advancements in machine learning and artificial intelligence to make a meaningful impact on how diabetes is managed and treated in the future."

For more examples of how Abbott products, people and broader business are advancing sustainability around the world, check out our 2017 Global Sustainability Report.

Do not ignore symptoms that may be due to low or high blood glucose, hypoglycemic unawareness, or dehydration. Check sensor glucose readings with a blood glucose meter when Check Blood Glucose symbol appears, when symptoms do not match system readings, or when readings are suspected to be inaccurate. The systems do not have alarms unless the sensor is scanned, and the systems contain small parts that may be dangerous if swallowed. The systems are not approved for pregnant women, persons on dialysis, or critically-ill population. Sensor placement is not approved for sites other than the back of the arm and standard precautions for transmission of blood borne pathogens should be taken. The built-in blood glucose meter is not for use on dehydrated, hypotensive, in shock, hyperglycemic-hyperosmolar state, with or without ketosis, neonates, critically-ill patients, or for diagnosis or screening of diabetes.