Ultra Rice® is virtually indistinguishable from traditional rice, but each grain is packed with a powerful blend of nutrients.

The humble grain of rice feeds billions of people throughout the world, so why not make it more nutritious for everyone?

That's exactly what Abbott and their partner organizations set out to do when they developed Ultra Rice: to give rice a boost in micronutrients and improve health for millions of people at risk for malnutrition.

According to lead scientists at Abbott, fortifying rice in a way that preserves its flavor isn't easy.

"It's one thing to pack nutrients into rice. But you have to do it in a way that the consumer is going to accept," said Dan Schmitz, regional head of research and development at Abbott’s nutrition business. Enhancing a daily staple with nutrients so that it still looks, cooks and tastes like rice — while keeping it affordable — is a considerable challenge. By combining the nutrition expertise of Abbott and PATH, a non profit organization that seeks to improve global health, the partnership aimed to introduce a new formulation of Ultra Rice that will effectively deliver nutrients to help address malnutrition.

Ultra Rice is created with a mixture of rice flour and a nutrient blend that can be tailored to the nutritional needs of whoever will be eating the rice. The mixture is extruded in pasta-making equipment and then added into the normal rice supply, usually at a 1:100 ratio.

The resulting product is nearly identical to traditional rice, but much more nutritious. Abbott nutrition scientists worked with PATH to improve its Ultra Rice® fortification technology in ways that reduce costs while improving nutritional value, ease of manufacturing, stability and taste.

PATH and Abbott's foundation, the Abbott Fund, also built local production capacity in target countries by working with local rice miller sites to eliminate international shipping and increase supply at the site. They also worked with public and private sectors and have developed low-cost quality assurance systems that ensure the rice continues to be the highest quality possible.

India is a great example of how this model works. In the public sector alone, the Indian government provides approximately 25 million metric tons of rice to 325 million consumers. Ultra Rice's production by local businesses and rice millers builds and empowers local capacity and strengthens local distribution chains, all while combating the symptoms of malnutrition among the nation's population. 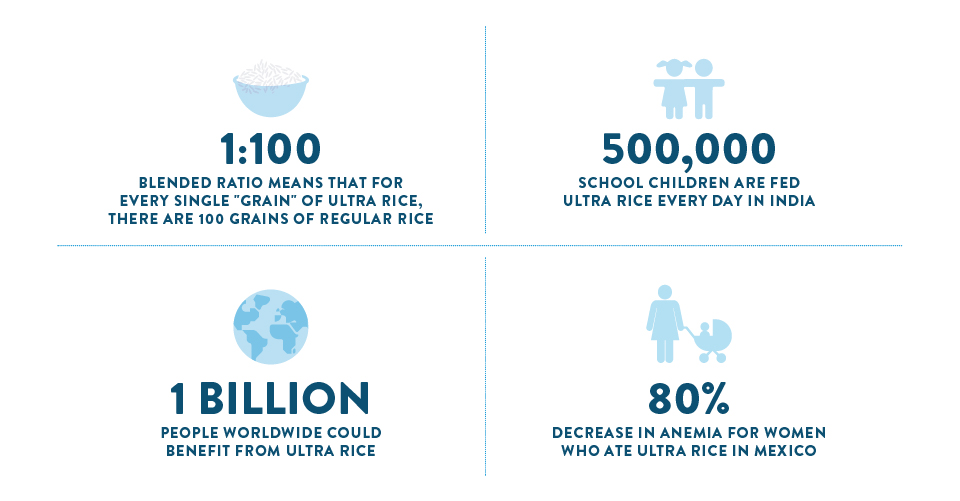 Consuming Ultra Rice regularly reduces malnutrition symptoms. For example, in Cambodia, schoolchildren that were given the rice had significantly higher levels of vitamin A, and they also had higher test scores after six months of eating the fortified rice, according to PATH.

In Mexico, women who ate Ultra Rice had an 80 percent decrease in anemia, and schoolchildren in India also increased their iron stores significantly.

These are just a few examples of the power of micronutrients and how supplementation can significantly improve the health of millions, and possibly billions throughout the world.