Two Scientists, 35 Years Apart: How to Fight a Virus

Sushil and Katharine worked around the clock on tests for HIV and COVID-19, respectively. This is their story.

Sushil Devare and Katharine Qiu have a lot in common.

Both have helped develop technologies that hunt for viruses.

Both have worked around the clock to develop first-ever diagnostic tests while racing against worldwide outbreaks – 35 years apart.

Though the two share a unique experience, their two battles against HIV and COVID-19, respectively, were different.

Dr. Sushil Devare, a retired Distinguished Research Fellow at Abbott, experienced some of the proudest moments of his career about 35 years ago as he and his Abbott colleagues tracked, analyzed and developed a diagnostic test for HIV. When he initiated research on novel viruses at Abbott, not much was known about HIV. The virus implicated in the development of AIDS was identified in 1983, however, there was no test to diagnose HIV infected individuals. There was an urgent need to stop transmission of HIV, especially through blood supply. There were no therapeutic treatment options. The team knew they had a job to do. 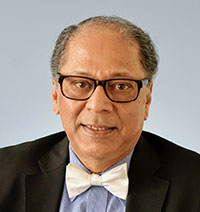 Dr. Sushil Devare is a retired Distinguished Research Fellow at Abbott, who was part of the team of Abbott scientists and researchers that developed the first ever FDA approved diagnostic test for HIV. In June of 1984, Abbott became one of five companies granted a license by the U.S. Department of Health and Human Services to develop the world’s first HIV test. Sushil still remembers the sense of urgency the team felt.

"We knew we had to develop a test quickly — for the world and the company — to stop the deadly spread of HIV infection" he said.

The team established a six-month deadline to develop a test, and promptly boarded a private flight to Hagerstown, Maryland to receive live HIV stock from the U.S. government, and carry it right back home to Abbott in North Chicago.

"The biggest challenge was to grow this highly infectious virus in a bio-containment setting and scale up the virus. We had to come up with a protocol on how to deactivate the virus very quickly," Sushil recalls. "By August of 1984, we had a prototype test."

From there, clinical trials were performed at warp speed, and full U.S. FDA approval came within three months, after submission for approval in March 1985.

"At the time, Emergency Use Authorization (EUA) did not exist. We had to receive full approval," Sushil explained.

Abbott emerged with the first ever FDA-approved test for HIV.

For Katharine Qiu, Divisional Vice President of infectious disease research and development, one of the proudest moments of her career came after a very tense thirty days in the spring of 2020. 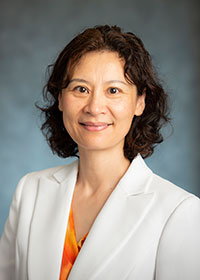 Katharine Qiu, Ph.D. is our Divisional Vice President of infectious disease research and development, who worked with a team of Abbott scientists and researchers to develop our ID NOW COVID-19 test. About one month after receiving the call that she and her team would need to do the impossible — develop and deploy a rapid test for COVID-19 in a matter of one month — the President of the United States stood holding our ID NOW COVID-19 test in the Rose Garden of the White House.

"My mom saw the news and called me. I’ve been involved in the development of a couple dozen products, never have so many people texted and called me with such excitement," Katharine said.

For those thirty days, Katharine and her team were working around the clock. No weekends, no days off and often working three shifts per day to make the days longer, taking brief breaks only to review data and scarf down meals onsite.

"I got the phone call to develop the test and thought, 'here comes a test of our ability to fulfill Abbott’s commitment to point of care.' "

Outside, the world began to unravel around them as the SARS-CoV-2 virus spread and case numbers rose.

"We knew the world was at war with this virus. When we are at war, if we do nothing, then our chance of success is zero. I told my team, if we try, at least we have a 50/50 chance. 50% is better than zero," Katharine said.

Together in that commitment, Katharine and team designed and tested more than 800 possible reagent combinations and communicated daily with everyone from technical groups and cross-functional teams to executive leadership and suppliers. They then evaluated prototypes, conducted verification studies and submitted to the FDA for EUA. Aiming to get this test to the people who needed it fast, the FDA authorized the test under EUA on March 27th, 2020.

HIV and COVID-19 are entirely different viruses. From the rate and method they spread to the response they evoked from the world. Still, both of these scientists recall the same feeling: that personally and professionally, they had to step up. The world depended on it.

And at both historical moments, our teams have risen to the challenge, racing against time to develop tests and help slow the spread of these two diseases.

Another thing that these two viruses have in common? We haven’t stopped fighting them since. The Abbott Pandemic Defense Coalition continues the efforts that Sushil and team sparked decades ago, tracking and analyzing HIV samples and working around the world to better understand the virus. In 2019, Abbott Virus Hunters discovered a new strain of HIV for the first time in nearly two decades, and the following year, found a rare group of HIV controllers in the Democratic Republic of Congo, potentially paving the way to a cure.

Today, APDC has expanded its outreach amidst the COVID-19 pandemic, continuing to coordinate and collaborate with governments, organizations and foundations to identify, analyze, track and test emerging viral threats.

Behind the technological and scientific advancements that end up in laboratories around the world, are people like Sushil, Katharine and their teams, answering the call and impacting lives across the globe. They have that in common.