How One Test Changed HIV

March 2 marks more than three decades since an Abbott breakthrough: The first licensed test for HIV.

1985 brought us the film "Back to the Future" and the first worldwide rock concert, Live Aid. It was also a time when people believed you could catch HIV from touching a doorknob, using a toilet seat or sharing a beverage with someone who had HIV.

March 1985 marks a key milestone in the fight against HIV since the U.S. Food and Drug Administration (FDA) approved the first-ever test to screen blood donors for exposure to HIV.

This was an unparalleled scientific breakthrough in the speed and accuracy of detecting HIV in blood, at a time when fear was high and many myths prevailed. In the early 1980s, fatal, incurable AIDS was in the news regularly. People put off donating and receiving blood as well as undergoing necessary surgeries for fear they would contract the virus. The world was in a panic. Eventually researchers came to understand the virus was transmitted through certain body fluids, including blood, but a test was not available for screening blood, which put the blood supply at risk. At the time, in some U.S. cities an estimated 1 in 90 transfusions was infected with HIV.1

Much of that changed on March 1985, when the FDA licensed the first test to screen blood for exposure to HIV, developed by Abbott. The approval marked a culmination of a frenetic nine months of round-the-clock work by Abbott scientists to develop a reliable test to screen donors for exposure to a virus, known then as HTLV-III, which is the cause of AIDS. Approval of the new test was announced by Health and Human Services Secretary, Margaret Heckler and U.S. FDA Commissioner Frank Young, at a packed news conference in Washington, D.C. Immediately, the test was adopted by the American Red Cross and other blood organizations around the world. Following the introduction of the test, the risk of acquiring HIV from a transfusion has become minimal. Today, millions of patients are safely given blood transfusions every year. 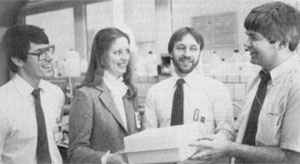 George Dawson says, "What was key to our success was that we approached everything systematically. We met daily, divided up the work, and then generated data during the daytime hours so that we could review it at the end of each day. We used this approach to resolve each hurdle."

Looking back, Robin Gutierrez remembers, "We would work evenings or come in on the weekends, often dining out of the vending machines, in order to maintain progress on this project. Working on this test was truly one of those 'once in a lifetime' opportunities that I'll never forget." 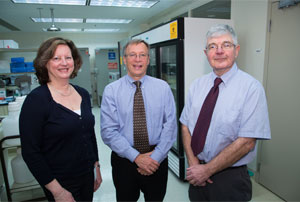 More Than Three Decades Later: Is an AIDS-Free Generation Within Our Grasp?

Abbott's work in HIV didn't stop in 1985. Since then we have launched different HIV tests and our global viral surveillance team is working around the clock to monitor for new mutations and strains of HIV to appear.

HIV continues to be a major global health issue. Our weapons for fighting HIV are testing, treatment and continuous tracking of this rapidly mutating virus. It’s estimated that of the 37.9 million people living with HIV, 21% of people living with HIV don’t know they've been infected.2 Voluntary HIV testing and counseling allow people who have HIV to know their status, get life-saving treatment and care, and prevent HIV transmission to others.

Check out these resources to learn more about HIV: