How to Make Your Move from 5Ks to Marathons

You’ve conquered 5Ks. But if your first marathon seems out of reach, you need to read this.

5Ks feel comfortable. Doable. Fun. Hence why more than 8 million people (both runners and self-professed "non-runners") crossed the finish line in 2017, according to data from Running USA.

But here's the thing: marathons can be, too. "A lot of people run and enjoy 5Ks, but feel intimidated by marathons," says Beth McQuiston, MD, a neurologist, registered dietitian and Abbott medical director. "They have these negative messages that they tell themselves, or "mental weeds" that ultimately make them feel like they can't do it. But they can."

The weeds range from things like, "I don't have the time to train" to "I'm not an elite athlete," she says. "You have to ask yourself what you are telling yourself, going point by point, pulling those mental weeds and replacing those negative thoughts with something positive."

That's what Ryan Patena, a senior IT business analyst at Abbott, did when he received a diagnosis of type 1 diabetes. "I did running activities in college to stay in shape and get to know other people, but I was always distance-averse," he says. "I didn't run longer distances and definitely didn’t consider myself to be an excellent athlete. But right after college, I was diagnosed with type 1 diabetes. It was something that restricted me from everyday activities and my routine. I couldn't just go out and do whatever I wanted anymore. Then the idea of running a marathon took on a new meaning. It became a different kind of challenge, and I wanted to prove to myself and others that I could do it."

And he did. So far, twice. "What's really telling to me is that my goal was to run a marathon once," Patena says. "The fact that I did it last year and went on to do it again speaks to the overall experience. In a marathon, everyone is unique in their own situation, athletic ability, health and age. But it's all about encouraging each other to succeed at what’s challenging to them."

As you make your move from 5Ks to marathons, here are five tips to help you succeed.

1. Focus on Incremental Improvements
"I didn't really think of it as training for a marathon, but running another mile," Patena says. "I would think, 'Maybe I can get myself from 3 to 4 miles.' It was all about incremental improvements, and adding a little bit to what I’d already done and felt confident that I could do."

By breaking up your 26.2 goal into mini goals, attaining each one feels much more doable, McQuiston says. Plus, with each incremental success, you gain confidence in your ability to keep going.

2. Find Intrinsic Motivation
Crossing the finish line might be your end goal, but it's important to find motivation in every training run, McQuiston says. Called intrinsic motivation, the best marathon motivation is enjoying what you’re doing while you're doing it.

When you've got a side stitch, that's easier said than done, but Patena says that after the first couple of weeks spent running, tapping into intrinsic motivation becomes more natural. "For me, running became a great way to get some personal time and relieve stress—relax, reflect, get some fresh air," he says, noting that the vast majority of his training is outside because that's what he enjoys.

If you can't run outside, McQuiston recommends watching a nature program or listening to nature sounds while you run on the treadmill. Studies show, such techniques and linkage to the outdoors can keep you interested, give you a mental lift and help motivate you.

Once you mind goes there, you maximize your results, she says.

4. Prioritize Yourself
In all things health, it's important to make yourself a priority. But marathon training, especially in the final months and weeks, can become a part-time job, with some training runs taking 2 or more hours. "You have to be ok with saying, 'No, I can't do that because it interferes with my training,'" McQuiston says.

She also recommends surrounding yourself with people who understand and will support and encourage you to reach your goals.

5. Run Your Own Training Plan and Race
There are a lot of cookie cutter marathon training plans out there, but McQuiston recommends opting for an individualized approach to both your training runs and race day. First thing's first: Talk to your doctor about your goal and any health considerations that you should take into account when training.

"About four months before the marathon, I got really serious about my training, but some people may need more or less time," Patena says. "The key is taking it at a pace that is comfortable to you."

Likewise, McQuiston says to run at the time of day that realistically works for you. "If you hate mornings, don't try to make yourself a morning runner," she says. Go with your body's natural rhythms and don’t compare your running practice to anyone else's. The same goes for race day. Run your own race. 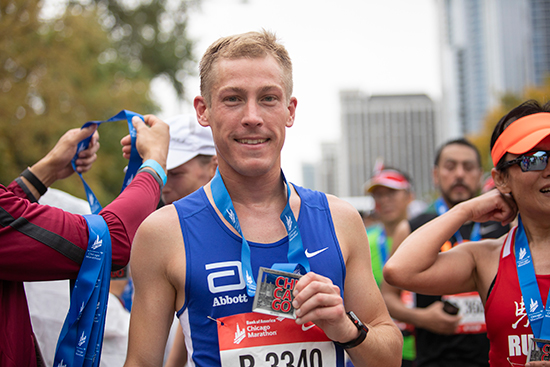 Ryan Patena at the finish line of the 2018 Bank of America Chicago Marathon.

Get more marathon advice from a champion.