A Rebel (Wilson) With a Cause: Concussion Awareness Now

We're joining forces with Rebel Wilson and 18 advocacy groups to raise awareness on the seriousness of concussions.

Rebel Wilson — actress, comedian, producer and new mom, star of the iconic "Pitch Perfect" trilogy — is always on her mark. She quips. She deadpans. She performs her stunts. She crushes it.

But one day, while filming "Isn't It Romantic," in Long Island, New York, Rebel noticed a grassy hill leading down to the set was slippery from the morning dew. As both the producer and star actor in the film, she warned to crew to be careful – only to slip herself seconds later. She landed right on the back of her head.

She lost consciousness briefly, and knowing a hit to the head was nothing to muck around with, ended up in an ambulance to be evaluated at the hospital. Diagnosis: Concussion.

Rebel will be the first to tell you: Concussions don't only happen to athletes and stunt doubles.

"In reality, concussions are almost always everyday accidents like whacking my melon after slipping on the morning dew," she said.

She's right. Nearly half of traumatic brain injury (TBI) hospitalizations are caused by slips and falls, a far cry from the intense dancing and stunting Rebel does onset. And the idea that athletes are most at risk of concussions is a common myth – a recent Abbott survey found that 84% of people believe this.

And if Rebel hadn't checked her melon and sought testing, she could’ve risked further injury. Research has shown that there's an increased risk of a second concussion after your first one, known as second impact syndrome, often due to slower reaction time, dizziness or vision changes.

The one thing she would do differently now, though, is take a break.

"I felt pressure to go back [to set] because if I didn't, they wouldn't be able to shoot for the whole day," she said. "They said my concussion was mild and it wasn't that dangerous to 'act' that day, essentially walking and talking in the scene. So I returned to work," she said. "In hindsight, this was a mistake, and I should've rested, especially because my symptoms got worse over the next few days. I guess I looked fine from the outside … but it wasn't the wisest idea." 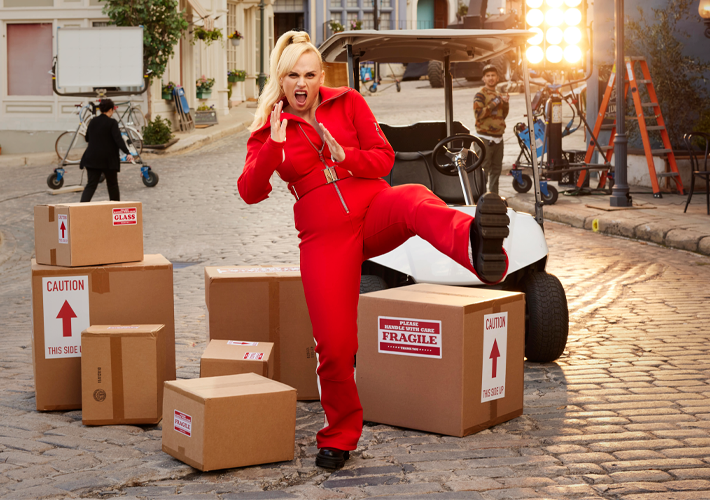 That's why she’s speaking out and working with Concussion Awareness Now — new coalition we cofounded with the Brain Injury Association of America and nearly 20 other advocacy groups representing the elderly, veterans, emergency physicians and victims of domestic violence — to raise awareness surrounding the seriousness of concussion and the importance of getting tested after a potential head injury.

With over half of people who suspect they’ve sustained a concussion never getting checked and 62% of people who had a jolt or hit on the head not seeking medical care, the coalition is working to change the way we think about a hit to the head.

"Concussions can be invisible injuries, with the true impact hidden beneath," said Dr. Beth McQuiston, Medical Director and board-certified neurologist. "Your brain makes up nearly everything about you, which is why it's so important to understand that concussions are serious injuries, and that they require a diagnosis and care."

This isn't our first rodeo in the brain injury space. We've dedicated eight years to concussion research, advocacy and diagnostic test development, notably with the innovation of our i-STAT TBI Plasma test, the first rapid, handheld, objective test for concussions.

In our almost decade of work in concussion awareness and testing, we’ve seen the invisible impact head injuries can have and how testing can make the invisible visible, helping those who have sustained an injury get the care, rest and recovery they need.

So, if you sustain a hit, blow or jolt to the head: don’t walk it off or tough it out. Take Rebel’s advice: “Take it easy for a bit and rest – don’t push through and feel like you have to keep going as normal if your body needs a break.”

In the meantime, learn more about concussion signs and symptoms and Concussion Awareness Now.