Floor to Foothills: The Cadence of Healing

Tom Reed was 36 when he had a stroke. Cardiovascular technology and discipline helped chart his road to recovery.

The cadence of the heart, the run, and the loves of Tom Reed.

He was 36 in 2018, playing on the kitchen floor with 5-year-old Harper, having just put 2-year-old Maddie to bed when "something happened." There was no loss of consciousness, no pain. There was, however, that bewildered expression on his daughter's face which turned increasingly worried. He realized that while he thought he was speaking to her, no words came out.

"I stood up, walked around the kitchen, sat back down and thought I was talking to her, but again, nothing," Reed said. “She was asking, 'What's wrong, daddy?' I could see the reaction in her face and tears starting to well up. I went to my wife who was getting ready for bed and I still couldn't speak. She told me to lift my arms. I could raise my left arm but not the right."

His wife, a nurse practitioner, immediately recognized the problem and got him to the hospital as quickly as possible. The rhythm of that night accelerated as the staff rushed to diagnose and treat his condition. This young, active father who went to the gym regularly had experienced a stroke.

After medication was administered and the clot in his brain dissolved, the search was on for the cause.

Ultimately, the culprit was revealed to be a patent foramen ovale (PFO), a hole in the heart that didn't close the way it should have after birth, decades earlier. The hole, which sits between the upper heart chambers, develops while in the womb and typically closes during infancy.

The condition occurs in about 25% of people, yet most don’t require treatment for it, or even know they have it.

Reed was not so fortunate. "My vascular surgeon gave me the diagnosis and explained that the PFO had not only caused the stroke but put me at risk for more of them," Reed said. "It was important to fix the hole and reduce that likelihood."

Fortunately, his surgeon believed he had just the tool for the job: Abbott’s PFO device (now available as the AmplatzerTM TalismanTM PFO Occluder), a big name for a small medical device designed specifically to repair the condition. This occluder -- one of several in the Structural Intervention portfolio at Abbott  -- sets the standard, pioneering treatment developed specifically for PFO closure to reduce the chance of recurring ischemic strokes.

And Reed was focused on doing everything he could to prevent another stroke. "All I could think about was Maddie and Harper growing up and how I needed to not just be there for them, but to make sure I was the healthiest I could be."

When Words Can't Be Found

In the meantime, that optimal version of Tom Reed needed some work to get himself back into fighting trim. The first obstacle to overcome was being able to say, "fighting trim," out loud when he wanted. His stroke had caused a clot in the area of his brain that processed communication. The resulting condition, aphasia, left him with severely compromised speech and language skills.

While fortunate enough to have no long-term ambulatory effects from the stroke, Reed's communication issues were challenging. "I did speech therapy during the original hospitalization, followed by 3 pretty intensive months of 2-3 times per week, then 1-2 times per week for six months, finishing up with regular sessions about a full year post-stroke."

His communication skills have continued to improve consistently, though less dramatically, over the past couple years. "People say I sound so much better over time and that always feels good to hear," Reed said. "Lately, it's been pretty comforting that people I didn't know before don't seem to realize that I had a stroke."

But Reed's path to recovery has been neither easy nor short. In fact, it was the very challenges he faced post-stroke that inspired him to choose the extraordinarily long road that resulted in his current condition.

"Aphasia is for Life."

By the time 2018 was ending, Reed could safely categorize it as a rough year. His recovery, while strong for someone who had suffered a stroke, was still that of a stroke patient.

"Aphasia is for life," Reed said. "I still have the effect of that damage and it was worse back in 2018. I've learned ways to mitigate the impact, but sometimes I'll think I've written or said something and realize I haven't. My mind thinks the whole sentence, but it doesn't translate to the keyboard or in my speech. I sometimes have short-term memory loss. It can be frustrating."

These medical problems added layers of difficulty to his job as a metal industry sales professional, as well as his marriage, which ended the following year.

Reed needed a new path forward and chose a very long one.

"Before the stroke I didn't really care for distance running," Reed said. "I was a three times per week gym guy, who did some weights and worked on the cardio machines."

Then the breakthrough happened.

The Road to Recovery is Long

"I realized that running can be therapeutic. It helped a bit physically but had a tremendous impact mentally and emotionally. It brought clarity to some thoughts that required more introspection while removing others that were just slowing me down. The more I found myself getting into the rhythm of the run, the more I felt I was getting back to controlling my life."

As his runs through the scenic Colorado foothills got longer, the benefits continued to accrue.

"Especially in 2018 when, frankly, I was going through a lot, I noticed that pushing myself harder helped, because if I could do this grueling thing, it wasn't that hard compared to all the other challenges I've met. It helped me realize that I could overcome things in my life that seemed overwhelming. Over time, it reset my confidence."

It also reset his life. First, there was the running club in Boulder, where distance devotees meet every Wednesday, followed by signing up for events including mini-marathons in locales both distant (including one in Indianapolis, near a boyhood home) and nearby (Denver). 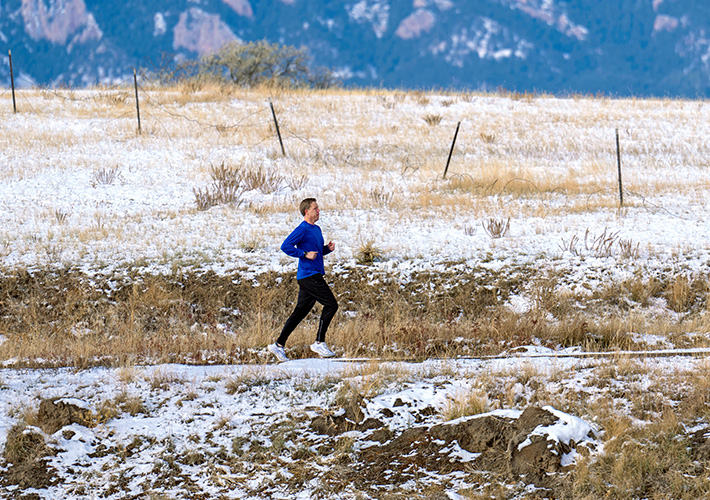 Always one eager to pay it forward, Reed reached out to the American Heart Association (AHA) to contribute to their philanthropic efforts. As a survivor, he has spoken at several events and assists in frequent awareness-building and fundraising efforts. CycleNation, part of the AHA, has also taken advantage of Reed's passion for fitness and volunteer work through multiple events, with more to come.

He is grateful for the people in his life, none more than his growing daughters. Even the benefits he gets from the isolation of distance running are tied in with his desire to be part of a larger whole.

"There is a good kind of loneliness in running where you can be with just you and let in only what you want to," said Reed. "You have the rhythm of your own thoughts and that can make it easier to come up with solutions, think of ways to make life better or just remember what and who is important to you.

"My whole life, I've tried to see the positive. A lot of bad things have happened over the past few years, to me and my community. My stroke, the pandemic, wildfires destroyed over 1,000 homes in my town, including those across the street from mine … But I'm healthier than ever, I have my girls and I'm helping people. My attitude is when one door closes, another opens …"

As he steps through that door, Tom Reed feels that magical cadence that powers his life:

The Amplatzer™ Talisman™ PFO Occluder is indicated for percutaneous transcatheter closure of a patent foramen ovale (PFO) to reduce the risk of recurrent ischemic stroke in patients, predominantly between the ages of 18 and 60 years, who have had a stroke due to a presumed paradoxical embolism, as determined by a neurologist and cardiologist following an evaluation to exclude other causes of ischemic stroke.

CAUTION: Intracardiac echocardiography (ICE) or transesophageal echocardiography (TEE) is recommended as an aid in evaluating the PFO and placing the Amplatzer™ Talisman™ PFO Occluder. If TEE is used, the patient’s esophageal anatomy must be adequate for placement.

CAUTION: Be cautious when using fluoroscopic X-ray guidance, which may be used during placement of the device.

CAUTION: Do not use a power injection system to put contrast solution through the sheath.

The safety and effectiveness of the Amplatzer™ Talisman™ PFO Occluder has not been established in patients (with):

PATIENT COUNSELING INFORMATION
Physicians should review the following information when counseling patients about the Amplatzer™ Talisman™ PFO Occluder and the implant procedure:

It is recommended that the medical team (neurologist and cardiologist) and the patient engage in a shared decision-making process and discuss the risks and benefits of PFO closure in comparison to using antithrombotic therapy alone, while taking into account the patient’s values and preferences.

POTENTIAL ADVERSE EVENTS
Potential adverse events that may occur during or after a procedure using this device may include, but are not limited to: