SHE JUST WANTED HER LIFE BACK

Spinal cord stimulation faces off against chronic pain to give woman another chance at her youth.

It’s the kind of thing you might expect to see on the Lifetime Channel on a Sunday night. Opening credits roll as the camera follows a little girl, bent by the scoliosis that curves her spine.

Following her through the awkwardness of growing up, we see her undergo spinal fusion surgery by the time she’s hit 20. Her back now straight, thanks to some permanent metal hardware, she is well on her way to recovery.

We see shot after shot of a happy young woman doing the things she’s always hoped to do: fishing, hiking and climbing around the San Francisco Bay area she’s lived all her life. And in what we expect to be the end of the movie, there is an extended wide shot as we see her finishing the second of her two marathons, wrapped in warm embrace by family and friends.

But that’s not how Sara Smith’s story goes to break. This is real life and, in real life, stuff happens.

A break in the action

Out there, living her life, Sara is an ER Technician and she is not close to running out of mountains to climb. Emboldened by her many physical accomplishments, she took on new challenges: like some things that didn’t hurt… and dirt bikes. 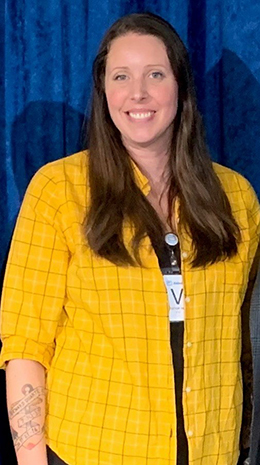 Ultimately, it wasn’t a fair fight. She took a rough spill, breaking a bolt on the spinal brace she’d had since the fusion surgery. The metal was repaired but the flesh was not so lucky. Her severe pain led to increased medication and decreased mobility. Numerous treatments followed: sacroiliac joint injections, more meds, physical therapy…and yet, no relief.

Soon she would no longer be able to lead the active outdoor and social life that had come to define her, limiting her interaction with her young children and friends. Eventually, even the 30-minute car ride to visit her parents proved overwhelming. It all came to be much too much, isolating her from the people and activities she loved.

“Emotionally, it’s depressing --33 and I should be active, but I can’t take my kids places,” she said.

She felt her young body aging far beyond her years, with constant aching and throbbing that forced her to retire to the couch for days at a time.

You want many things for the star of this story, but chronic pain is certainly not one of them. None of this was in the original script.

Searching for a treatment option that would allow her to re-engage with her own life, and that did not involve medications, Sara returned to the care of her pain management physician. The doctor had an idea. They discussed an innovative approach to her chronic pain: Spinal Cord Stimulation.

“She’s the first doctor who believed I was in pain and not a pill seeker,” Smith said.

She was “all-in” from the beginning, willing to try just about anything to give her back her old life. With the Abbott Proclaim XR recharge-free stimulation system, she receives low intermittent doses of mild electrical impulses to change pain signals as they travel from the spinal cord to the brain.

Simply put, the technology works by blocking the nerves from telling Sara’s brain that she is in pain. The impact was swift and life-changing. “The whole concept is amazing to me,” she said.

The Proclaim XR platform is app-based and includes upgradeable software so that, as advances are approved, they can be seamlessly introduced to the patient without further surgery. That was the case for the low-dose, recharge-free update that uses less energy, extending battery life for up to a decade.*

Smith – one of an estimated 50 million people in the United States living with chronic pain—experienced 70-75% pain relief during the trial period.

For the first time in a long time, Sara can do housework and other activities without resting. Even more impactful than chore endurance, Sara is now capable of spending more -- and better -- time with her family – including those formerly prohibitive car rides to the grandparents’ house that were seemingly part of the past. Now they are an important part of the present and future.

Sara has her hop back, as she returns to a “normal life.” And she still has big goals to reach.

So, perhaps in three or four years, that Lifetime movie idea can be revisited.

Cue Take Two: Sara Smith, mid-30’s, her spine straight, her body’s pain addressed thanks to Proclaim XR and Spinal Cord Stimulation, back on a smoother road to recovery. The smile is back and wide. The montage includes her fishing and hiking and that final pan shows her crossing the finish line of her third marathon. Just look how far she’s come. Let the tears and the credits roll…

*Up to 10 years of battery longevity at the lowest dose setting: 0.6mA, 500 Ohms, duty cycle 30s on/360s off. NOTE:  In neurostimulation therapy, ‘dose’ refers to the delivery of a quantity of energy to tissue. There is no demonstrated difference in safety or effectiveness among these doses.

Hannah Went to College. Diabetes Went With Her.

“The whole concept is amazing to me.”