For Diabetes Testing, the Future is WOW

The most personal technology is technology with the power to change your life. FreeStyle Libre is exactly that.

No part of diabetes "fingersticks" is enjoyable. Not the "‘finger" part. Certainly not the "stick" part.

But for many people living with diabetes, it's a very real, often inescapable reality of their daily lives.

It's doesn't have to be that way, not for people managing their condition with Abbott's FreeStyle Libre flash glucose monitoring system.

It was true for Courtney Duckworth, diagnosed with diabetes during childhood. 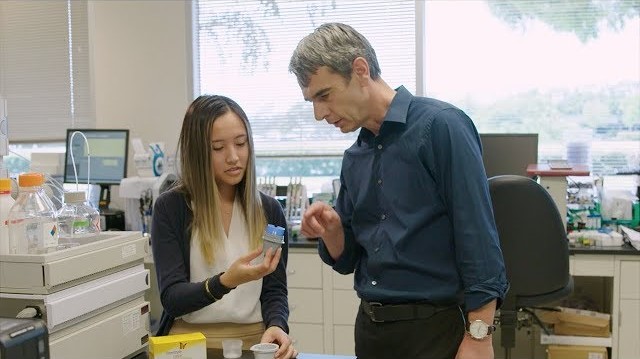 "I can do everything better with technology," says Courtney Duckworth, FreeStyle Libre user and Abbott spokesperson. By reinventing daily glucose monitoring and creating a painless and seamless option for people living with diabetes, Abbott is helping people like Courtney live better lives.

"When I was first diagnosed you would definitely know I was diabetic by looking at my fingertips because they were raised. There were all of these, you know, brown bumps and scabs on them," Courtney said. "Before the FreeStyle Libre, I have to stop to test my blood sugar. That would take up a lot of time."

Courtney not only doesn’t stop frequently anymore, she's isn't even really slowed making sure she's maintaining healthy glucose levels. Not with a simple swipe over her sensor tucked away on the back of her upper arm. That's especially true when she's working out and running marathons, balancing her body's exercise and glucose demands.

And with FDA approval, FreeStyle Libre 14 day sensors in the U.S. now last two weeks between changes with high accuracy. It's the epitome of life-changing technology.

"I can do everything better with technology," Courtney added*.

Do not ignore symptoms that may be due to low or high blood glucose, hypoglycemic unawareness, or dehydration. Check sensor glucose readings with a blood glucose meter when Check Blood Glucose symbol appears, when symptoms do not match system readings, or when readings are suspected to be inaccurate. The systems do not have alarms unless the sensor is scanned, and the systems contain small parts that may be dangerous if swallowed. The systems are not approved for pregnant women, persons on dialysis, or critically-ill population. Sensor placement is not approved for sites other than the back of the arm and standard precautions for transmission of blood borne pathogens should be taken. The built-in blood glucose meter is not for use on dehydrated, hypotensive, in shock, hyperglycemic-hyperosmolar state, with or without ketosis, neonates, critically-ill patients, or for diagnosis or screening of diabetes. Review all product information before use or contact Abbott Toll Free (855-632-8658) for detailed indications for use and safety information.