Where Health, Consumers, and Tech Meet

Edgy startups and big-name tech giants aren't the only ones hiring UX and informatics pros. Health companies are, too.

Joel Goldsmith is a Bay Area-based Senior Director of New Product Innovation, a "technology evangelist"—the type you might expect to find designing the next must-have wearable device.

But instead of going the Silicon Valley consumer tech company or startup route after completing a year-long biodesign innovation fellowship at Stanford University, he chose to take his User Experience (UX) research and user-centered design expertise to Abbott's Diabetes Care business. There, he's worked on glucose monitoring systems such as the game-changing FreeStyle® Libre Flash Glucose Monitoring System, a new sensor-based glucose monitoring solution that's currently available to people with diabetes in Europe.

"My orientation was somewhat unique," says Goldsmith, who also has degrees in neuroscience and business. At Abbott, he's not only been able "to help establish and grow the Product Innovation group, but to help develop a whole new product category. For someone who's a product purist like me, you don't always get that opportunity."

"The introduction of wearables as a category—plus the startups fueled by the growing awareness of mobile and consumer health technology—has changed the game. For his team, "A lot of what we do looks more similar to a mobile app company than a traditional medical device company."

Call it the changing face of today’s health-focused R&D. 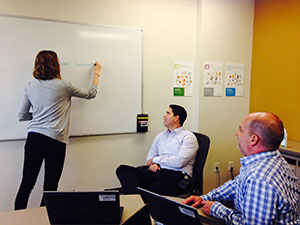 When you think of talent in "the Valley," what often comes to mind are engineers, marketers, and entrepreneurs at household-name tech companies—or who are building the next billion-dollar startup. But in today's digitally connected healthcare space, product development teams need to know user-centered design as much as biology or chemistry.

Job candidates are exploring how their UX, product design, and consumer insights skills can translate to innovation in other fields, including the business of health. Increasingly, this top-tier talent is a mash-up of scientists, engineers, and UX pros—often with world-class marketers also in the mix.

As a global healthcare company that develops products and technologies designed to improve and maintain people’s health, Abbott has become increasingly consumer-focused over the past two years. It's still a science-based, innovation-driven company with most new hires coming from scientific and engineering fields. But "increasingly, new types of expertise are in demand, including Informatics, software engineering, and digital data strategy," says Vildan Stidham, divisional vice president of Abbott Global Talent Acquisition.

Greg Morrow, a divisional vice president in Abbott's Silicon Valley-based Vascular business, joined in January from nearby Invisalign, where he led its consumer-focused clear braces business. Before that, he'd spent years in leadership roles at Johnson & Johnson Vision Care and Novartis Consumer Health—and arrived at Abbott with a wealth of consumer marketing experience that includes Coca-Cola, Folgers coffee, and the global Pringles potato chip brand. Morrow sees experience like his as "an expanded capability" for business areas like Vascular, which are starting to talk more directly to consumers.

And with medical and health corporations appealing directly to people through ads and social media content, such hiring is happening more than ever, says David Vied, Global Sector Leader, Medical Devices & Diagnostics at Korn Ferry, a global talent management and consulting firm. Tech industry giants like Apple, Google, and IBM are increasingly moving into the healthcare and medical arena. And, says Vied, "with enormous resources to bear, they will change the way the industry moves."

The main force behind this shift? "Data-driven decision-making."

That's what powers the work that Informatics expert Jay Srinivasan, divisional vice president of R&D, does for Abbott's diagnostics business. A software engineer at Abbott years ago, he rejoined the company last year after heading his own healthcare consulting group. He's staffing his growing team with entrepreneurial-minded thinkers with "Silicon Valley-focused tech skills." Human Factors, or ergonomics, pros "who understand what a wearable looks like and how you test for one." User-centered design experts, and data scientists—including one newly hired from a grocery industry startup. "We're taking that (startup) approach to talent. I'm really looking for who's smart, capable, and wants to change the world." 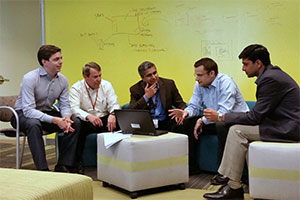 Jay Srinivasan (center) leads Automation and Informatics for Abbott's Diagnostics business. Collaboration with fellow R&D specialists and other colleagues (to his left, Nick Wood and Rod Rasmussen; to his right, Kevin Barnes of Global Marketing, and Sunil Soni) is the norm—and this divisional vice president’s building a team with tech skills that mirror those in Silicon Valley.

Powering Health, Not Just a Device

The son of a California physician, Joel Goldsmith says the "feel-good factor" of the health industry definitely attracted him to Abbott's diabetes care business. "For a lot of people, that's very compelling. It sort of comes down to what is your personal motivation ... I care deeply about making a meaningful contribution to the life sciences space and patients' lives."

And that passion for life-changing, empowering work exists across Abbott and the industry.

"Millennials want to know they’re going to make a difference," says Srinivasan—but that demographic isn't alone. "Cultural fit matters more than anything else. What drives you?"

"What we do touches the most significant part of our lives: our health." At Abbott, he says, "we're at the intersection of health and technology. To me, that's the biggest selling factor."