A Proven Solution for Employees With Student Debt

Abbott clinical specialist Leahannah Taylor knows from personal experience that strength can be found in numbers.

One number that motivated her toward financial wellness was $59,000 – the amount of student loan debt she owed after graduating from college with both her bachelor’s and master’s degrees in biomedical sciences.

“I had a single financial goal after I had my degrees in hand,” Leahannah says. “Make that debt disappear.”

A little more than a year later, she had eliminated it.

Leahannah credits her ability to pay her loans off so quickly to disciplined budgeting, (“No getting my nails done or eating out,” she says) along with Abbott’s Freedom 2 Save program.

Four years later, about 1,900 Abbott employees have signed up for Freedom 2 Save with an uptick in enrollments over the last two years. In 2021, the average monthly enrollment was 50% higher than in 2019.

“The popularity of this program tells us that student loans remain a challenge for our employees,” said Mary Moreland, executive vice president, Human Resources. “We know the issue of student loan debt isn’t going away. That’s why we’re committed to continuing this program, which helps employees like Leahannah live financially successful lives.”

Abbott created the program after hearing from employees that they were having a hard time both paying their student loans and contributing to their retirement accounts. By design, Freedom 2 Save ensures employees don’t miss out on the benefits of starting their 401(k) savings earlier in their careers.

“I was able to start my retirement savings early and take advantage of compound interest,” Leahannah says. “I’m hoping that means I’ll have a nest egg worth hundreds of thousands of dollars more by the time I retire.”

That investment extends for future generations.

As part of Abbott’s 2030 Sustainability Plan, the company aims to expand Freedom 2 Save to further support employees’ financial security. The goal is to provide $10 million in matching contributions to program participants’ retirement accounts by the turn of the next decade. 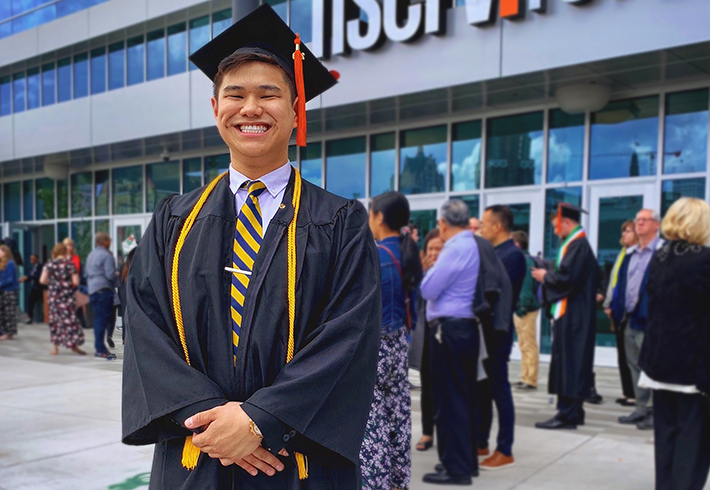 Ask Kyle Perez what $35,000 in student loans feels like and he’ll answer with one word – heavy.

“I was an engineering student working with long formulas and huge numbers, but nothing could have prepared me for the weight of $35,000 until I started paying it off after graduation,” Kyle says. “It really dictates the way you live your life, having to make those payments month by month.”

Kyle signed up for Freedom 2 Save soon after starting work as a clinical specialist at Abbott. The program gave him the traction he needed to pay off his loans over about 18 months. Then he kept going, paying off his car too.

“Many students may graduate with educational debt and it can seem borderline impossible to tackle,” Kyle says. “But programs like Freedom 2 Save can provide the momentum you need to pay it off and still save for your retirement at the same time.”

“I’m moving on to saving for other things I’ve always dreamed of,” he says, “like traveling the world!”