Abbott continues to revolutionize care for people with diabetes with its best-in-class FreeStyle portfolio.

Abbott has kept a steady drumbeat of innovation across its FreeStyle portfolio in 2020 and the company isn’t about to break its streak now.

The much-anticipated FreeStyle Libre 3 system — featuring the world's smallest, thinnest1 glucose sensor (about the size of two stacked U.S. pennies) — has received CE mark for people with diabetes in Europe.

This next-gen system provides the same benefits of FreeStyle Libre 2, including unsurpassed 14-day2 accuracy and optional glucose alarms, but also evolves the portfolio with new features, such as continuous real-time glucose readings automatically delivered to a person's smartphone every minute and a sensor that's easy to apply with a one-piece applicator.

"Continued momentum for the global Libre franchise" is expected, Cowen analysts wrote in a June 15 note.3

The FreeStyle Libre 3 system is designed to fit seamlessly into people's lives, enabling users to discreetly check their glucose as often as they like without having to fingerstick.4 This is a life-changing innovation that lets people live better and gain deeper understanding of their glucose levels.

Abbott's FreeStyle Libre 3 is unparalleled in the market, here's why:

In just four months, Abbott has achieved three key milestones for its sensor-based glucose monitoring tech: FreeStyle Libre 2 was cleared in June by the U.S. Food and Drug Administration for adults and kids ages 4 and up with diabetes; Libre Sense Glucose Sport Biosensor was CE marked in September for athletes ages 16 and up who don't have diabetes; and now, FreeStyle Libre 3 has received CE mark for ages 4 and up with diabetes.

This continuous innovation shows Abbott's strength in the market, which is vast and growing with 463 million adults living with diabetes, according to the International Diabetes Federation (IDF). This number is projected to balloon 51% to 700 million people by 2045, IDF data show.

Abbott is launching the FreeStyle Libre 3 system in Europe in the coming months. 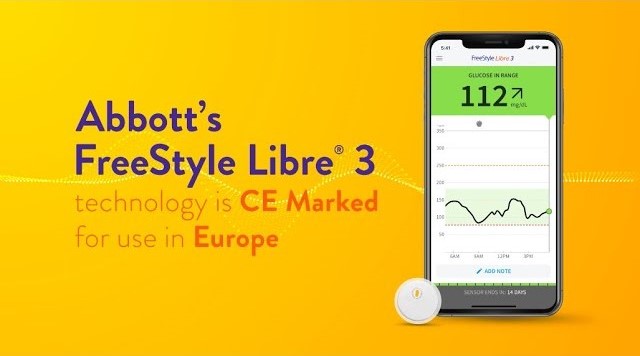 4Finger pricks are required if glucose readings do not match symptoms or expectations.

6Based on a comparison of list prices of the FreeStyle Libre portfolio versus competitor CGM systems available worldwide. The actual cost to patients may or may not be lower than other CGM systems, depending on local reimbursement, if any.