Miles White to Step Down as CEO at the End of March, Remains Executive Chairman

Miles White, Abbott’s iconic Chairman and CEO, is stepping down after a remarkable 21-year tenure, effective March 31, 2020. Robert Ford, Abbott’s President and COO, will become CEO at that time and Mr. White will remain Executive Chairman.

Mr. White has strategically reshaped Abbott into one of the world’s leading health technology companies during his time as Chairman and CEO. He’s one of the longest-serving CEOs in healthcare and his achievements include internal advances such as FreeStyle Libre, the world’s leading continuous glucose monitor, and the Alinity family of diagnostics instruments, as well as hundreds more important technologies.

Mr. White is the architect behind Abbott’s ability to remain relevant and anticipate the future of healthcare through a combination of important internal investments and transactions. He’s responsible for creating two highly successful companies – Hospira in 2004 (which was acquired by Pfizer in 2015) and AbbVie in 2013, which is a Fortune 100 company today. He also spearheaded one of the most successful acquisitions in the pharmaceutical industry, purchasing BASF’s Knoll pharmaceutical business in 2001, which would lead to the world's leading drug, Humira. Most recently, he cemented Abbott’s leadership in medical devices and diagnostics with the additions of St. Jude Medical and Alere.

His bold strategic thinking and transformative actions have taken Abbott from what was a $75 billion company in 1999 with the majority of sales in the U.S., to the Abbott of today – one of the world’s most admired companies with a market cap of nearly $150 billion, business in more than 160 countries and 103,000 employees around the world.

To learn more about Mr. White’s most notable achievements during his tenure, click here.

With this transition, Mr. Ford becomes the 13th CEO of Abbott in its 131-year history, all having been appointed from within, a testament to Abbott’s strong management philosophy and succession-planning discipline.

During Mr. Ford's 23 years at Abbott, he has served in many leadership roles within the company. As Executive Vice President of Medical Devices, he oversaw the integration of St. Jude Medical, Abbott's largest acquisition, and led Abbott's Diabetes Care business and the launch of FreeStyle Libre. He earned a bachelor's degree from Boston College and a master's degree in business administration from the University of California Berkeley, Haas School of Business.

To read the full news release on this announcement, please click here. 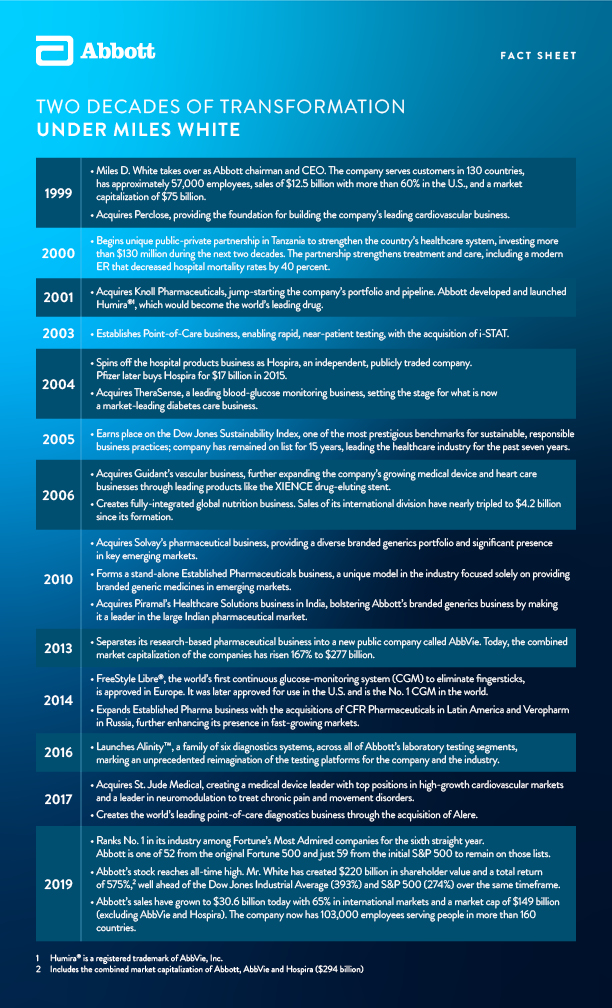