One in 5 children in Haiti don’t have access to the nutrients they need to thrive. Together with the Abbott Fund and Partners In Health (PIH), Abbott is helping Haiti build local capacity and create long-term, impactful change through an innovative model to fight malnutrition and stimulate the country's economy.

The effort centers on the Nourimanba Production Facility in central Haiti, an 18,000-square-foot, Haitian-staffed factory that makes a highly nutritious, peanut-based treatment for severely malnourished children. The product, called Nourimanba, is distributed for free to children in PIH's hospitals and clinics across rural Haiti.

More than 50 Abbott specialists in science, manufacturing, engineering and other areas joined with experts from PIH and its Haitian sister organization, Zanmi Lasante, to design and build the facility. To date, Abbott has provided more than 14,000 hours of volunteer technical support and almost $10 million has been provided in funding through the Abbott Fund.

As an operation fully staffed by Haitians, the program puts opportunities into the hands of factory workers and farmers. In addition to running the Nourimanba facility, Haitians are growing the peanuts that go into this life-saving product.

The Nourimanba facility provides this life-saving product to a network of 12 health facilities in the Central Plateau and lower Artibonite in Haiti, contributing significantly to the health and well-being to more than 2,000 children with severe malnutrition and 3,000 children with moderate malnutrition per month. After much success, the facility now produces over 90 metric tons of product per year.

In time, the new facility will also use the locally grown peanuts to produce a commercial peanut butter. Sales of that peanut butter will help support continued free distribution of Nourimanba while creating much-needed economic opportunity in Haiti.

A fertile ground for a home-grown enterprise

With Haiti's rich agricultural history and ideal growing conditions in the Central Plateau, there is tremendous opportunity to expand local peanut cultivation, which will provide a reliable supply for the new facility.

In 2013, working together with Zanmi Lasante and another of PIH's sister organizations, Zanmi Agrikol, as well as the international nonprofit TechnoServe, the partnership piloted a new business supply chain model to expand the supply of quality, cost-competitive peanuts while boosting incomes for approximately 300 local smallholder farmers.

These farmers acquired new skills and expertise in farming and received financing for seeds, fertilizer and other supplies. In addition, 35 local residents learned how to provide services such as tillage and harvest collection.

Results showed that the effort significantly improved crop quality and boosted farmers' incomes. Based on the success of the pilot, other partners are now replicating and expanding this model across Haiti, with the goal of improving farming and increasing income for farmers across the country. 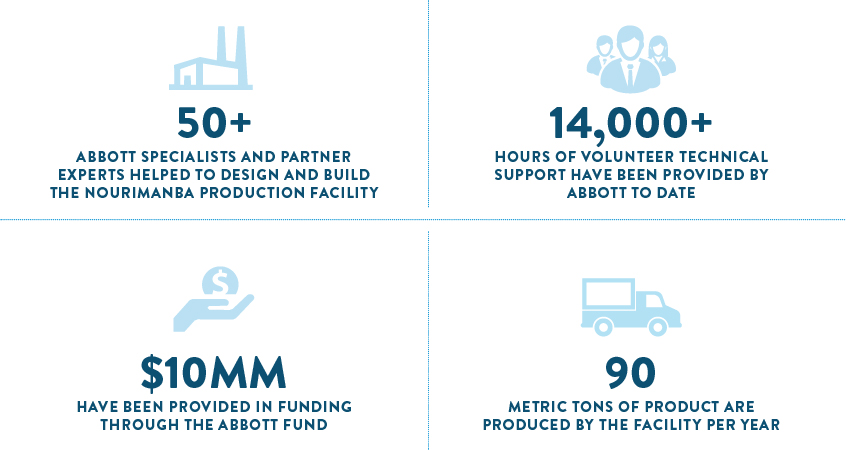 These efforts are part of Abbott's continued citizenship work to support and sustain healthy communities around the world.