Cheering Health: One Kilometer at a Time

Abbott employees turned out to cheer at the Tokyo Marathon, officially kicking off the Abbott World Marathon Majors.

Do you have what it takes to complete a marathon? Approximately 36,000 runners from all over the world laced up their running shoes and gathered at the Tokyo Marathon starting line on Feb. 22 to answer that very question. For many, the 42.195 kilometer (26.2 mile) course was the culmination of months of dedicated training and preparation. For all of them, it was a testament to what's possible with good health.

That sentiment couldn't be truer than during a marathon. Such long endurance races are the ultimate demonstration of the power of health. They are inspiring not only to the runners who complete them, but also to the millions of people who turn out to cheer along the course. Abbott team members and their families were among the nearly 1.7 million spectators that lined the streets of Tokyo to encourage the participants, including a few of our Abbott colleagues, as they made their way through the city streets.

Around 200 Abbott employees and their families came together in front of our Tokyo offices to show their support. Runners who passed the Abbott Cheer Zone at the 14th and 17th kilometers were greeted with special cheers from the group and the encouraging tinkling of cow bells. We tracked our Abbott runners throughout the course and excitedly shouted their names as they rushed by. Our enthusiasm spread as a number of runners interrupted their own pace to high five the Abbott crowd. One runner, dressed in a Michael Jackson costume, performed the moon walk in front of the team.

Here are some of our favorite Tokyo Marathon moments: 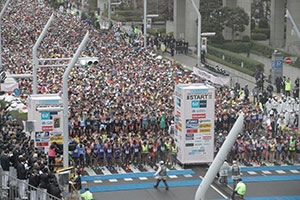 36,000 participants line up at the starting line of the Tokyo Marathon. 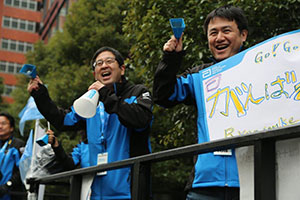 Hundreds of Abbott employees cheered on the runners at kilometer number 14. 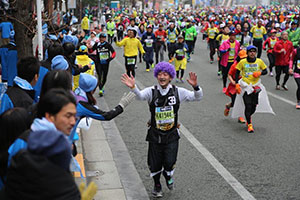 A runner gets a high five from an Abbott employee on the course. 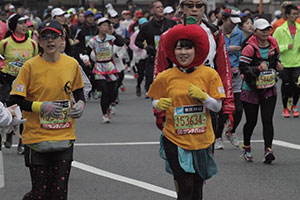 Thousands of participants wore costumes as they completed the race. 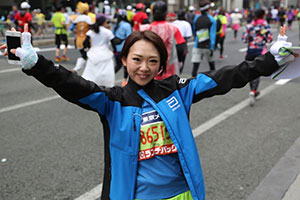 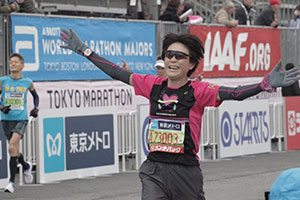 A runner crosses the finish line of the Tokyo Marathon.

Through the Abbott World Marathon Majors partnership, Abbott is creating opportunities to demonstrate and bring to life our core mission of helping people unlock all that life has to offer through the power of health. Throughout the series, we’ll be supporting, celebrating and hopefully inspiring runners and supporters through activities such as at the pre-race expo, on-course cheering and event signage.

It was amazing to witness runners of all ages from so many countries come together to challenge themselves and cross the finish line at the Tokyo Marathon. We were happy to motivate them along the way. Next up, we plan to cheer on runners in Boston and London in April. Maybe we'll see you there.